An Alternative Narrative From Afghanistan 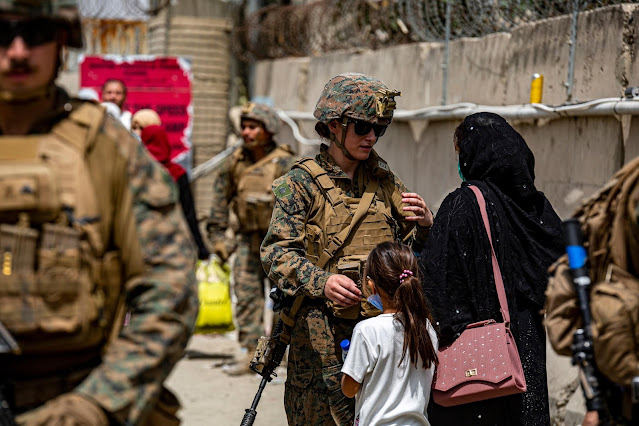 We are all grieving the loss of life that resulted from the terrorist attack by ISIS-K in Afghanistan on Thursday. But while Republicans scream about President Biden having "blood on his hands," let's take a step back and ponder the viewpoint of those who are putting their lives at risk.

Those serving in Afghanistan are in the business of saving lives - fully aware that it might cost them their own. That strikes me as the most noble venture a human being can undertake. But even AFTER the bombing, when warnings continued about credible threats, they didn't let up. On Friday, another 6,800 people were evacuated, bringing the total to 111,900. As Breen said, "that is honor."

Take a look at what one of the civilians involved in transporting refugees from Germany to the U.S., Delta Airlines pilot Alexander Kahn, had to say about his involvement.

"I was able to put myself in their position," he said. "This is going to be a frightening experience ... But it has the potential to be an excellent experience." pic.twitter.com/IXwJdqYYY5

When those refugees reach Dulles airport, Chef José Andrés is there to meet them with a hot meal.

What’s happening in Afghanistan breaks my heart…but the outpouring of support from people across America helps glue it back ❤️‍🩹 Our @WCKitchen team at Dulles Airport saw even more refugees today….They had to go bring hundreds of extra meals & are still serving! #ChefsForAfghans pic.twitter.com/hpRJmAYhl6

Some of the refugees will have family or friends, who have been terrified about their fate, waiting to greet them.

The other side of the “chaos.”

Shakiba Dawod, an Afghan artist who lives in France, kisses her mother Qadira as they reunite for the first time in 12 years, following the family's evacuation from Afghanistan.https://t.co/cR6yYnSgNR pic.twitter.com/cVij1dRAuc

While so many in the media are obsessed with the narrative about chaos and calamity and right wingers politicize the entire operation, let's not forget what this is all about. Members of the U.S. military are risking their lives to evacuate people from Afghanistan while other Americans are stepping up to support them in that journey. Don't let the haters rob us of the stories about these heroes.