On Afghanistan, the media is demonstrating its alignment with the Blob. 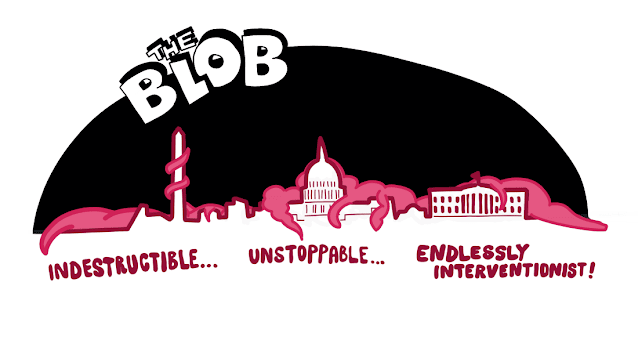 Six weeks before he was inaugurated as vice-president in 2009, Joe Biden met with president-elect Barack Obama upon his return from a fact-finding mission to determine what the new administration was facing in Iraq and Afghanistan. As Peter Baker reported, the news about the latter was not good.

“It has deteriorated significantly,” Biden said. “It’s going to be a very heavy lift.”...

“He came to question some of the assumptions and began asking questions about whether there might be other approaches that might get you as good or better results at lower cost,” said Richard N. Haass, the president of the Council on Foreign Relations, who has been consulted by Mr. Biden on the matter...

“His concept was to keep a small footprint, have an offshore strategy as the sole approach to seeking better security and stability in Afghanistan and focus on counterterrorism and the hard-core ideologues who won’t change,” General McNeill said.

Former Republican congressional staffer Mike Lofgren recently wrote this about why the situation in Afghanistan had "deteriorated significantly."

Whether Joe Biden made any serious tactical mistakes in the withdrawal is irrelevant in the larger scheme, because Afghanistan was doomed almost from the beginning. It started out ostensibly as a hunt for Osama bin Laden and his protective cadre of al Qaeda. But in December 2001, as U.S. and allied special forces began to narrow the search down to the Tora Bora mountains near the border with Afghanistan, strange information began to cross my desk at the House Budget Committee, where I then worked as a defense budget analyst.

The budget supplemental requests told the story of a huge military buildup in progress. Was it perhaps to send more U.S. ground troops to establish a cordon around the Tora Bora area to supplement the pathetically few special forces on the job? No, the troops and their gear were bound for the Persian Gulf, to prepare for the invasion of Iraq – a country that had nothing to do with the 9/11 attacks.

Senator Bob Graham was one of the few members of Congress who were disturbed by the fact that capturing bin Laden – ostensibly the cause of all our problems – played second fiddle to George W. Bush’s personal vendetta with Saddam Hussein, particularly when the U.S. commander in Afghanistan, General Tommy Franks, told Graham the administration was even pulling critical forces already in Afghanistan to move to the Gulf.

We now know that it was eventually President Obama who tracked bin Laden down in Pakistan and sent in special forces to eliminate the threat he posed.

That is just some of the context that reporting about the current situation in Afghanistan has completely ignored. Both right wing and major media outlets are obsessed with words like "chaos," "doom," and "failure" to describe what they see as a massive miscalculation by Biden. In wrestling with that obsession, Josh Marshall suggests that they have "bought in" to what Ben Rhodes once referred to as "the Blob" (the American foreign policy establishment).

[O]fficial DC, which means the city’s elite national political press, was deeply bought in. This doesn’t mean they were warmongers or rah-rah militarists...But they were deeply bought in in ways that are likely best seen in sociological terms. Countless numbers embedded with US military formations. They accompanied members of Congress on “CODELS” to the warzones. They’ve been immersed with a Pentagon which has spent two decades building hammers to hit nails in the Middle East and Central Asia. Their peers study and write in the world of DC think tanks focused on the best ways of striking those nails...

What we see in so many reactions, claims of disgrace and betrayal are no more than people who have been deeply bought into these endeavors suddenly forced to confront how much of it was simply an illusion...Nowhere has this been more blindingly clear than in the Capital’s news-driving email newsletters and the eager voices of the same folks on Twitter, ramping themselves up into escalating paroxysms of outrage and doom casting over the ugly scenes emerging on viral videos, all the while overlooking their support for the policies that made the events inevitable. The intensity of the reaction, the need to stay tethered to the imagery of Sunday and Monday, is a perfect measure of the shock of being forced to confront the reality of the situation in real time.

What made it all hit home for me was a line from CNN's Luke McGee. He described Biden's decision to end our military occupation of Afghanistan by saying that the leader of the free world was "washing his hands of a global problem." Behind a statement like that is the assumption that the only way the U.S. can engage global problems is via military intervention.

I was reminded that in 2016, then-President Obama told Jeffrey Goldberg that "real power means you can get what you want without having to exert violence." He went on to talk about his own struggles with "the blob" —which he referred as the Washington playbook on foreign policy.

“Where am I controversial? When it comes to the use of military power,” he said. “That is the source of the controversy. There’s a playbook in Washington that presidents are supposed to follow. It’s a playbook that comes out of the foreign-policy establishment. And the playbook prescribes responses to different events, and these responses tend to be militarized responses. Where America is directly threatened, the playbook works. But the playbook can also be a trap that can lead to bad decisions. In the midst of an international challenge like Syria, you get judged harshly if you don’t follow the playbook, even if there are good reasons why it does not apply.”

Neither Obama nor Biden are anti-war. But they're also both smart enough to know that when it comes to foreign policy, the United States isn't limited to militarized responses. Here's how Biden addressed that during his remarks about Afghanistan last week:

I’ve been clear, the human rights must be the center of our foreign policy, not the periphery. But the way to do it is not through endless military deployments. It’s with our diplomacy, our economic tools and rallying the world to join us.

I can hear the cynics now. They're saying: "that will never work!" But we've been engaged militarily in Afghanistan for almost 20 years now. How did that work?

The point here is that media outlets have bought into the Washington playbook's assumption that violence is the only way for the U.S. to exert power in the world. I am personally grateful that Biden knows there are other tools we can deploy.