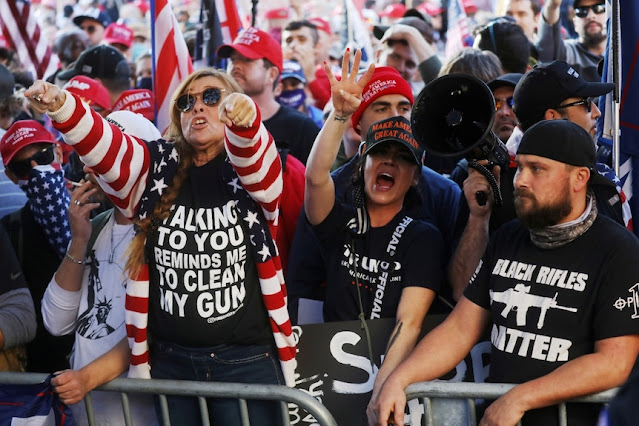 Following the January 6th insurrection, school board members have been threatened, while the F.A.A. has recorded more than 4,900 reports of unruly passengers this year. Reuters just reported on the threats being made to election officials.

In Arizona, a stay-at-home dad and part-time Lyft driver told the state’s chief election officer she would hang for treason. In Utah, a youth treatment center staffer warned Colorado’s election chief that he knew where she lived and watched her as she slept.

In Vermont, a man who says he works in construction told workers at the state election office and at Dominion Voting Systems that they were about to die.

“This might be a good time to put a f‑‑‑‑‑‑ pistol in your f‑‑‑‑‑‑ mouth and pull the trigger,” the man shouted at Vermont officials in a thick New England accent last December. “Your days are f‑‑‑‑‑‑ numbered.”

All of this comes as PRRI reports that "Almost one-third of Republicans say they think violence may be necessary to solve the problems facing the United States."

That is why a report from a TPM reader who lives in central Virginia - "industrial strength Trump country" - captured something important.

Yesterday’s election unsettled me, a lot. Despite decisive wins across the board a palpable, consuming rage drives Republican energy here, a rage that mere victory will not sate.

There’s a savagery in the opposition to President Biden and to the Democratic Party and its voters that seems to bubble up from a deeper well.

What is driving that savage rage? I suspect that Jen Senko, who made a documentary titled "The Brainwashing of My Dad" in 2015, has the answer.

My father was seduced by the anger and the excitement...There are very persuasive big personalities pushing my father's buttons and those of the audience in general. And you know what? That feels good. There is an addictive quality to anger like that. It was exciting for my father. It also provided him a group to belong to.

When asked about people contacting her with similar stories, here is what Senko said they all have in common:

One of them is anger. The relative, the loved one, the friend, whoever it may be, suddenly is angry more and more, it's their predominant mood. These people also become very argumentative. Many of these people who are watching Fox and are part of the right-wing echo chamber are incapable of having conversations that somehow do not turn to politics. They become obsessed with this new right-wing way of thinking. It becomes the person's mission. It is all of who they are.

I was reminded of an article by a young conservative, Richmond Ramsey, back in 2011.

I don’t know when it happened, exactly, but [mom] began peppering our conversation with red-hot remarks about President Obama. I would try to engage her, but unless I shared her particular judgment, and her outrage, she apparently thought that I was a dupe or a RINO...

I mentioned to a friend over beers how much Fox my mom and dad watched, and how angry they now were about politics.

I started to wonder how common this Fox Geezer Syndrome was. I began to poll conservative friends of my generation who had right-wing parents. At least eight different people – not an Obama voter among them, and one of them actually a George W. Bush political appointee in Washington – told me that yes, they had observed a correlation between the fevered emotionalism of their elderly parents’ politics, and increased exposure to Fox News.

These days, its not just Fox News. Rage addicts now have a plethora of fear-mongering publications to turn to, along with social media, OAN and Newsmax. If you've ever tried having a conversation with someone who depends on those news sources exclusively, you have some idea of how pointless it can be.

Within the epistemic bubble created by these right wing media outlets, the rage has developed into a kind of collective narcissism. Scott Barry Kaufman describes how that differs from tribalism.

Golec de Zavala defined [collective narcissism] to me as “a belief that the exaggerated greatness of one’s group is not sufficiently recognized by others,” in which that thirst for recognition is never satiated...

Collective narcissism is not simply tribalism. Humans are inherently tribal, and that’s not necessarily a bad thing. Having a healthy social identity can have an immensely positive impact on well-being. Collective narcissists, though, are often more focused on out-group prejudice than in-group loyalty. In its most extreme form, group narcissism can fuel political radicalism and potentially even violence. But in everyday settings, too, it can keep groups from listening to one another, and lead them to reduce people on the “other side” to one-dimensional characters.

One thing to keep in mind about all of this is that it is a social/psychological phenomena as much as it is political - which might help explain why the mainstream media has been so woefully negligent in connecting the dots about this most serious threat to our democracy. But make no mistake about it: a sizable portion of this country is being whipped into a savage rage by the lies right wing media is feeding them on a daily basis.