How the Media Covers Republican Obstruction 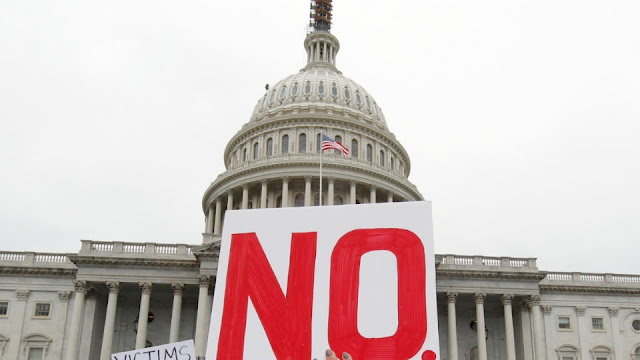 Two of the Democrat's major initiatives are currently stalled in the Senate: the Build Back Better Act and voting rights. Republicans have made it clear that they not only oppose these two pieces of legislation, they refuse to negotiate with Democrats on the goals of addressing the economic challenges faced by Americans or protecting the right to vote.

So how is the media handling this obstruction? A few headlines tell the story.

Washington Post: "Biden is failing politically, and not just because of Republican obstruction"

The New Statesman: "Joe Biden’s failure on voting rights could cost the Democrats the White House"

Perhaps you get the point. Failure to pass these bills is being laid at Biden's feet, not at Republicans for failing to even negotiate a compromise.

Politico took things a step further, suggesting that Biden's favorite columnists are revolting against him. Who are the columnists they talked to? The list includes David Brooks, Tom Friedman, Chris Matthews, and Josh Barro. Other than the fact that they are all white guys (mostly former Republicans), the one thing those four men have in common is that they're all suggesting that - even on voting rights - Biden has moved too far to the left.

For example, Brooks said that "Biden's aggressive rhetoric on voting rights...represents how he has strayed from his roots as a moderate." Even if you buy into the way right wingers have politicized an issue like voting rights, Brooks is completely ignoring the fact that the Freedom to Vote Act was a compromise designed in part by Senator Joe Manchin - a so-called "moderate" Democrat.
Josh Barro also seems to suffer from having a bad memory when he told Politico that “The top issue for voters is the economy. So every day that you’re talking about voting rights legislation, you do not appear to be focused on the economic problem that’s the number one issue for voters.” He doesn't seem to remember that Republicans also obstructed the Build Back Better Act, which would have gone a long way towards addressing the economic problems faced by Americans.
I won't hold my breath for a time when Barro calls out Republicans for their failure to even put forward an agenda to address "the number one issue for voters." Where are Republicans focused these days? On voter suppression. For example, on the first day Republicans regained control of the Virginia State Assembly, they immediately got to work on their number one priority.

Proposed bills include reinstating a requirement of an “excuse” to vote absentee, limiting absentee voting to a week or two weeks before Election Day and eliminating ballot drop-off boxes.

Other bills would require a photo ID to vote, require absentee ballots be mailed and received by Election Day to count, and eliminate the automatic absentee voter list – in which the registrar's office mails voters ballots for each election.

It's clear that Democratic Senators Manchin and Sinema are giving Republican obstructionists a boost by refusing to alter the Senate's filibuster rule to pass voting rights. But it's also important to remember that their votes wouldn't have been needed in 1982 when the Senate reauthorized the Voting Rights Act by a vote of 85-8 and it went on to be signed by President Reagan. Or how about 2006 when it was once again reauthorized, this time by a vote of 98-0, and signed by President George W. Bush?
When it comes to protecting the right to vote, where are the so-called "moderate" Republicans, like Senators Susan Collins, Lisa Murkowski, Mitt Romney, Bill Cassidy, and Richard Burr? They're all lined up with the obstructionists in their party. Are any of these columnists calling them out for moving too far to the right? Not a peep.
A group of former Democratic senators just put a lie to the idea that the push for voting rights is a move to the left. Doug Jones, who served as a senator from Alabama published a letter that was signed by a group that would fit the bill of being described as moderate. It included Senators Tom Daschle, Kent Conrad, Byron Dorgan, Heidi Heitkamp, Mary Landrieu, Blanche Lincoln, Mark Pryor, Mark Udall and Mark Begich. Here's what they said about voting rights.

Last year, we saw an unprecedented amount of misinformation regarding the winner of the 2020 presidential election, a violent attack on the U.S. Capitol in an effort to prevent Congress from certifying the election results, and partisan state legislatures trying to overturn the election in their states while erecting barriers to voting in future elections. Congressional Democrats have proposed multiple bills aimed at strengthening our democracy and advancing voter rights legislation that would instill confidence in our elections only to see them never reach the Senate floor. If the Senate cannot even begin to debate and vote on something as foundational as voting rights, we must reform Senate rules and restore the chamber to its rightful place as “the world’s greatest deliberative body.”

Protecting the freedom to vote should not be a partisan issue.

At this point, the only accurate way to tell this story is that, with an assist from Manchin and Sinema, Republicans have politicized an issue that was once bipartisan. They are not only obstructing efforts to protect the right to vote, they have prioritized voter suppression. The fact that the media isn't reporting it that way represents their own failure, not Biden's.