The news about President Biden's approval ratings is definitely not good. NBC News says that it points to a shellacking for Democrats in the 2022 midterms. Analysts at FiveThirtyEight document that one year in, Biden has the second lowest approval rating of any president.

Pundits who attempt to explain what's happening tend to point to (1) the persistence of the Covid pandemic, (2) inflation, (3) the failure to pass two pieces of major legislation. Those might all be factors, regardless of whether it is Biden who should be held accountable.

Gallup recently released their average Biden approval rating for his first year in office - which stands at 48.9%. Similar to what the analysts at FiveThirtyEight noted, that is the second lowest of any modern president. Only Trump did worse, and it was a lot worse, averaging 38% his first year.

But along with that piece of data, Gallup released some other numbers that must be included when analyzing why Biden's approval numbers are so low compared to previous presidents. They included the partisan divide on presidential approval. This table shows the divide from the largest to the smallest. But it's even more helpful to present the information historically.

Given the fact that so many Republicans live in a right wing news bubble where Biden is not only painted as a complete failure, but a threat to the country, it is unlikely that his 8% approval number will change much over the next three years. So I don't expect the 83% partisan gap to narrow - no matter what happens. Because of that, it is very likely that Biden will continue to have historically low approval ratings.

The place where Democrats can make some gains is with some of the voters who self-identify as independents. According to Gallup, Biden's approval rating with that group is only 33%. But to make some headway, we have to clear up some of the misinformation and confusion about who those voter are. 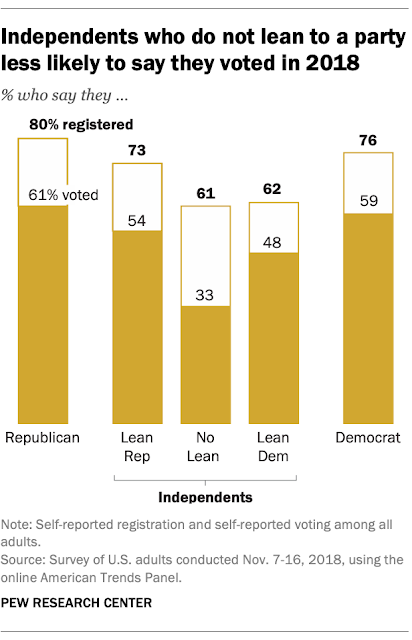 Being politically unengaged means that independent voters aren't likely to follow the nuances of the power plays going on in Washington D.C. They also aren't likely to listen directly to what politicians say, but hear references to headlines in the media. So as mainstream journalists focus on things like blaming Biden for the pull-out in Afghanistan, inflation, and the continuing threat posed by Covid, they buy into the idea that he's failing as a president.
As we get closer to elections, voters will hear more directly from candidates via advertising, as well as town halls and debates covered in their local news. At that point, there is often a discussion among Democrats about whether it is more important to persuade Republicans to switch their votes or mobilize those who don't vote. To the extent that winning depends on garnering support from independents, mobilization is the key - perhaps especially in midterm elections. Improving voter turnout among both those who lean Democratic and those who are truly independent could make the difference between winning a losing.
at January 21, 2022