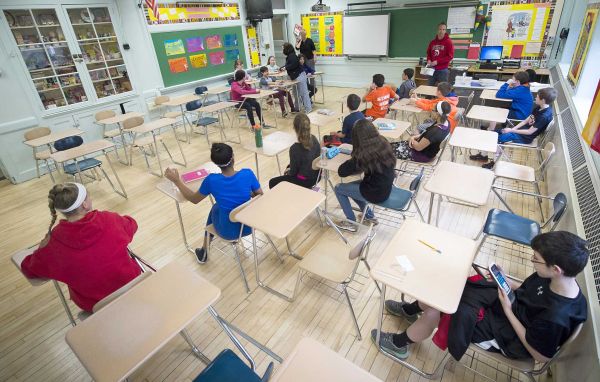 As the coronavirus continues to rage, schools have become one of the major battlegrounds on the question of how to respond. We've seen battles over mask mandates not only politicized, but escalate into some public school officials fearing for their lives.

As the new omicron variant spurs a whole new wave of infections, the question of whether schools should return to remote learning has once again surfaced. This particular battle is being framed as one between parents and teachers unions - especially after Chicago teachers went on strike for a few days. That provides a field day for right wingers like Stephen Moore.

It is time for a national revolt against the evil empire of teachers unions that has become the worm in the apple of our education system. How outrageous it is that parents, taxpayers and politicians have to beg teachers to teach...

What is clear is that handing over political control of our schools to the unions has done irreparable damage to our children. They are the virus injuring the health and well-being of our children. But it is also true that if we, as citizens and voters, allow this hostage-taking to continue, then we are responsible for the damage. We are to blame if we keep electing politicians who genuflect to militant unions.

Moore calls for a "Reagan moment" when the former president broke the back of the air traffic controllers union. In other words, he's not even trying to be subtle about the fact that Republicans have always fought against the power of unions. So they're more than happy to frame the current situation as one in which it is the "evil empire of teachers unions" against parents who simply want their children to be able to go to school.

The problem is that it is not just right wingers who are adopting that frame. At the New York Times, an article addressing this issue is titled, "As More Teachers’ Unions Push for Remote Schooling, Parents Worry. So Do Democrats."

Few American cities have labor politics as fraught as Chicago’s, where the nation’s third-largest school system shut down this week after teachers’ union members refused to work in person, arguing that classrooms were unsafe amid the Omicron surge.

But in a number of other places, the tenuous labor peace that has allowed most schools to operate normally this year is in danger of collapsing.

While not yet threatening to walk off the job, unions are back at negotiating tables, pushing in some cases for a return to remote learning.

At the Washington Post, Henry Olson has written an op-ed titled "Teachers unions are in the wrong on covid-19. Democrats must force them back to work."

The case both articles in these mainstream newspapers make is similar to the one made in the article by Stephen Moore. It basically amounts to: we have vaccines now, omricon appears to cause less severe illness, and there is now evidence that school closures harm students.

That's why I found it surprising that the Wall Street Journal seems to be the only national publication that looked a little deeper.

Many students in kindergarten through 12th grade are out sick because of Covid-19 or are being kept home by anxious parents, as the Omicron variant surges, officials say. Remote learning often isn’t being offered anymore for students who are home. Empty desks create a quandary for teachers, who must decide whether to push ahead with lesson plans knowing a large number of their students will need to catch up.

Here is just one example they provided:

In Rochester, N.Y., public school attendance last week ranged from 61% to 66%, according to school district data. Just 44% of students at one high school were present on Jan. 3, and barely half showed up at one elementary school, Superintendent Lesli Myers-Small said at a Jan. 4 school board meeting.

She said then that student attendance would be a factor, along with staff absences and Covid-19 infection rates, in deciding whether to move to remote learning. Two days later, the district made the temporary switch to virtual instruction.

In that case, it wasn't the teachers union that pushed for a return to remote learning, it was low student attendance, along with staff shortages.

That tends to be the story being told by local news. For example, in my area, teachers are proposing solutions to the problem of student absences, combined with the fact that there aren't enough school bus drivers or substitute teachers.

The contributor to all of this that is getting zero attention are parents who are making the decision to keep their kids at home out of fear of contracting Covid. It sometimes isn't just concern for their child. I  recently heard a report on local public radio where a father noted that a person in their family is immunocompromised, meaning that the possibility of their child becoming infected could threaten that person's life. Almost no one in the national media is talking to parents like that. If they did, the story would become more complicated than "teachers unions vs. parents."

What we have is yet another example of right wing media creating a narrative that is then swallowed whole by mainstream media. Providing the big picture would require getting out of the bubble and acknowledging the context that is missing in a simplified "us vs them" story.