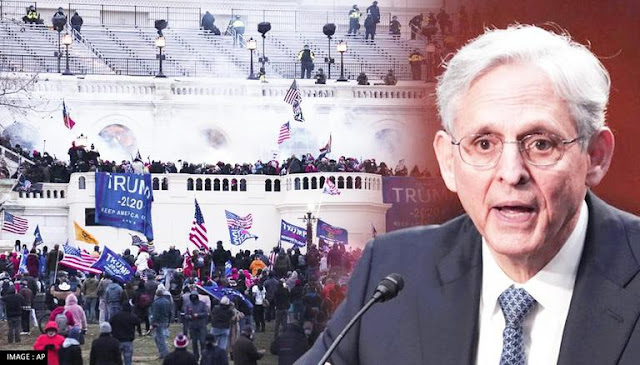 Over the last few months, right wingers have been claiming that the events on January 6 were not an insurrection or a coup attempt because none of the rioters have been charged with sedition. After the indictments were released by DOJ on Thursday, charging 11 members of the Oath Keppers with seditious conspiracy, the Daily Show suggested it is time to let that particular talking point rest in peace.

Oops! There are a lot of people who spent Thursday needing to wipe egg off their faces. So I thought it would be interesting to see what they're saying now.

So what is Turley saying today? The goalposts have been moved.

While I would not be surprised by additional charges against other co-conspirators and more details could emerge, the indictment does not support the prior allegations of a coordination or collusion with the Trump campaign...The charges of a relatively small number of extremists in this large protest belies rather than support the broader allegations of an actual insurrection.

Note that when it comes to coordination or collusion with Trump, Turley hedged his bets this time with a nod to the fact that additional charges and more details could emerge.

Glenn Greenwald is another one that simply moved the goalposts, going from "no charges of sedition" to "DOJ charges aren't tantamount to Truth."

Democrats are such authoritarians that they really do believe DOJ charges are tantamount to Truth.

Yes, Merrick Garland -- after a year of refusing to do so -- capitulated to mounting pressure and attacks from Dems by finally charging sedition. Everything in this video was true: https://t.co/kdV8pp0tpk

While not included in the Daily Show roundup, Fox News commentator Brit Hume holds the dubious distinction of tweeting this on the morning the indictments were released.

Here's a thought. Let's base our view on whether 1/6 was an "insurrection" on whether those arrested are charged with insurrection. So far, none has been. https://t.co/szsAGU3bz0

How do you recover from that kind of humiliation? You guessed it...move the goalposts.

When you don't think you can prove that someone actually committed the crime, you charge them with conspiring to do it. Juries in these cases might just convict, if they can stop laughing. https://t.co/EbY6S9Ow6G

With that tweet, Hume committed another "oops." There is no freestanding "sedition" charge in federal criminal law. The statute in question addresses "seditious conspiracy."

On the one year anniversary of January 6, Ben Sharpiro tweeted "It was not a 'coup' or an 'insurrection,' nor was it charged criminally as such." He's handled that "oops" by not saying a word about the recent indictments.

Perhaps the most bold statement came from Dan O'Donnell writing at The Federalist.

If, as they have been alleging for a year now, this insurrection was really aimed at toppling the incoming Biden government and reinstating Donald Trump as president, then why have none of the more than 725 defendants been charged with “seditious conspiracy” under 18 US Code § 2384?...

Wasn’t the whole point of the Jan. 6 “insurrection” to affect the certification of the election through intimidation and coercion? Why haven’t the charges or sentences reflected this?

The answer is as simple as it is predictable: The reality of Jan. 6 is nowhere near Democrats’ rhetoric about it. Jan. 6 was a riot and a national embarrassment, but it was not an insurrection, an attempted coup, or the worst attack on America since 9/11 or Pearl Harbor.

If it were, the criminal charges would have reflected it.

Bless Dan's heart! Now that criminal charges reflect the fact that eleven Oath Keepers engaged in a seditious conspiracy, what say you? Nothing, apparently. As of this writing, not only has O'Donnell failed to respond to the indictments, there is nothing about them at the Federalist website at all.

Of course, Tucker Carlson is one of the people who regularly repeated the right wing talking point about no one being charged with sedition. So what did he do after the indictments were released? Invited one of the indicted conspirators - Thomas Caldwell - on his show and gave him a platform to lie about the charges. Carlson zeroed in on the fact that Caldwell never entered the capitol building. But that is because he had another job to do.

While certain Oath Keepers members and affiliates breached the Capitol grounds and building, others remained stationed just outside of the city in quick reaction force (QRF) teams. According to the indictment, the QRF teams were prepared to rapidly transport firearms and other weapons into Washington, D.C., in support of operations aimed at using force to stop the lawful transfer of presidential power. The indictment alleges that the teams were coordinated, in part, by Caldwell and Vallejo.

There are those on the left, who - while not being as culpable as right wingers - consistently criticized AG Merrick Garland for only charging minor offenses. Apparently they didn't grasp that, exactly one week before the grand jury issued its 48-page indictment, Garland telegraphed exactly where the investigation was headed.

In complex cases, initial charges are often less severe than later charged offenses. This is purposeful, as investigators methodically collect and sift through more evidence...

The actions we have taken thus far will not be our last.

The Justice Department remains committed to holding all January 6th perpetrators, at any level, accountable under law — whether they were present that day or were otherwise criminally responsible for the assault on our democracy. We will follow the facts wherever they lead.

That brings to mind the three rings of the attempted coup outlined by Rep. Jamie Raskin:

It is clear that, when it comes to the DOJ investigation of January 6, they are winding down work on the outer ring and starting to bring cases against the middle ring. It is very likely that we will see subsequent indictments against other violent extremist groups, like the Proud Boys. If any of that produces clear evidence of a seditious conspiracy that was coordinated with the inner ring of Trump and his associates, Garland has committed to holding them criminally accountable.
When it comes to Trump's culpability, we don't know yet whether DOJ will be investigating the former guy's attempt to pressure Pence into rejecting electoral votes in order to send the election to the House - or how those efforts might be tied to the seditious conspiracy. So hang on to your hats. This whole thing is FAR from over.
at January 14, 2022