The Long History of Identity Politics With Supreme Court Justices 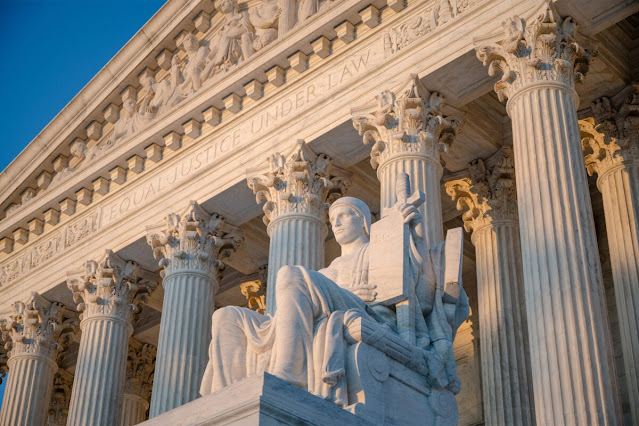 That puts to lie a recent statement by Jonathan Turley in response to President Biden's promise to nominate a Black woman. From 1790 to 1967, every member of the Supreme Court was selected "initially through an exclusionary criteria of race and sex." The quiet part that no one said out loud was that the nominee must be a white male, excluding all women and people of color.

Folks lighting their hair on fire over Biden's promise seem to have forgotten that, in 1980, Ronald Reagan promised to nominate a woman. Then, when Justice Ginsburg died, Trump promised to do the same. Funny that none of these right wingers ever accused them of using "an exclusionary criteria."

The truth is that it has always been Republicans who play "identity politics." In doing so, even when they nominate a woman or person of color, they tend to prioritize the person's gender or race over everything else. Because of that, they project those intentions onto Democrats. But President Biden has made his own criteria very clear.

The person I nominate to replace Justice Breyer will be someone with extraordinary qualifications. Character, experience, and integrity.

And they will be the first Black woman nominated to the United States Supreme Court.

Character, experience, and integrity are the priorities. But for the person he choses, those qualities will have been forged through the lens of what it means to be a Black woman in this country today.

We learned what that meant when former President Obama nominated Sonia Sotomayor to serve on the Supreme Court. You might remember that Republicans went a bit ballistic about the time she referred to herself as a "wise Latina." Here's what she actually said:

I would hope that a wise Latina woman with the richness of her experiences would more often than not reach a better conclusion than a white male who hasn't lived that life...

Personal experiences affect the facts that judges choose to see. My hope is that I will take the good from my experiences and extrapolate them further into areas with which I am unfamiliar...

Each day on the bench I learn something new about the judicial process and about being a professional Latina woman in a world that sometimes looks at me with suspicion...I willingly accept that we who judge must not deny the differences resulting from experience and heritage but attempt, as the Supreme Court suggests, continuously to judge when those opinions, sympathies and prejudices are appropriate.

Republicans claimed that those remarks made Sotomayor unqualified to serve because she wouldn't approach her duties objectively. But they completely ignored the fact that Justice Samuel Alito basically said the same thing during his confirmation hearings.

I tried to in my opening statement, I tried to provide a little picture of who I am as a human being and how my background and my experiences have shaped me and brought me to this point...

And that's why I went into that in my opening statement. Because when a case comes before me involving, let's say, someone who is an immigrant -- and we get an awful lot of immigration cases and naturalization cases -- I can't help but think of my own ancestors, because it wasn't that long ago when they were in that position...

When I have cases involving children, I can't help but think of my own children and think about my children being treated in the way that children may be treated in the case that's before me.

And that goes down the line. When I get a case about discrimination, I have to think about people in my own family who suffered discrimination because of their ethnic background or because of religion or because of gender. And I do take that into account. When I have a case involving someone who's been subjected to discrimination because of disability, I have to think of people who I've known and admire very greatly who've had disabilities, and I've watched them struggle to overcome the barriers that society puts up often just because it doesn't think of what it's doing -- the barriers that it puts up to them.

So those are some of the experiences that have shaped me as a person.

No one questioned whether any of that would hinder Alito's ability to be objective. That is because the experience of being a white man in this country is considered normative - just as it had been normative to nominate white men to serve on the Supreme Court. As women and people of color rise to positions of power in this country, those norms are being brought out into the open and challenged.

While I don't agree with Justice Alito about much of anything, I value his experience of coming from an immigrant family and being a father - just as I value Justice Sotomayor's experience of being a Puerto Rican woman raised in the Bronx. But it is only one set of experiences that challenge the status quo, which is why Republicans threw a fit about Sotomayor's remarks.

I suspect that these reactions to Biden's promise to nominate a Black woman are just the beginning of what will be an ugly process of confirmation. In some ways, I don't envy the person he choses. But then, as a Black woman in this country, it is very likely that she will have experienced all of that before. If Sotomayor is any precedent, that will at least be part of why she will make such an exemplary Supreme Court justice.