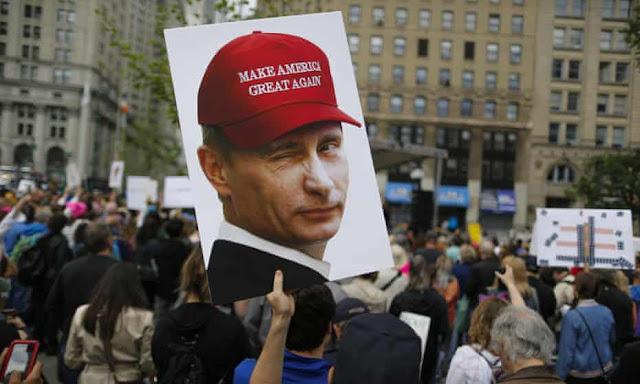 I'm not going to pretend the know what Russian President Vladimir Putin's intentions are in Ukraine. But there was at least one portion of the Steele dossier that captured the overall goal of his efforts to influence the 2016 election.

[The Trump operation’s] aim was to sow discord and disunity within the U.S. itself, but more especially within the Transatlantic alliance which was viewed as inimical to Russia’s interests. Source C, a senior Russian financial official, said the Trump operation should be seen in terms of Putin’s desire to return to Nineteenth Century “Great Power” politics anchored upon country’s interests rather than the ideals-based international order established after World War II.

That is why, when Putin invaded Ukraine in 2014, the Obama administration pointed this out:

"What we see here are distinctly 19th- and 20th-century decisions made by President Putin to address problems, deploying military forces rather than negotiating," says a senior administration official, speaking on background. "But what he needs to understand is that in terms of his economy, he lives in the 21st-century world, an interdependent world."

During a speech in Brussels not long after the invasion of Ukraine, President Obama outlined the conflict.

Throughout human history, societies have grappled with fundamental questions of how to organize themselves, the proper relationship between the individual and the state, the best means to resolve inevitable conflicts between states. And it was here in Europe, through centuries of struggle -- through war and Enlightenment, repression and revolution -- that a particular set of ideals began to emerge: The belief that through conscience and free will, each of us has the right to live as we choose. The belief that power is derived from the consent of the governed, and that laws and institutions should be established to protect that understanding...
It is in response to this tragic history [of two world wars] that, in the aftermath of World War II, America joined with Europe to reject the darker forces of the past and build a new architecture of peace. Workers and engineers gave life to the Marshall Plan. Sentinels stood vigilant in a NATO Alliance that would become the strongest the world has ever known. And across the Atlantic, we embraced a shared vision of Europe -- a vision based on representative democracy, individual rights, and a belief that nations can meet the interests of their citizens through trade and open markets; a social safety net and respect for those of different faiths and backgrounds...

So I come here today to insist that we must never take for granted the progress that has been won here in Europe and advanced around the world, because the contest of ideas continues for your generation. And that’s what’s at stake in Ukraine today. Russia’s leadership is challenging truths that only a few weeks ago seemed self-evident -- that in the 21st century, the borders of Europe cannot be redrawn with force, that international law matters, that people and nations can make their own decisions about their future.

As our democracy is challenged here at home, it should come as no surprise to any of us that right wingers are lining up in support of Putin's 19th century politics. Taking the lead on that is, of course, Tucker Carlson. He has asked why it is disloyal to side with Russia but loyal to side with Ukraine and told blatant lies about NATO - suggesting that they are some kind of occupying military force. That has made him quite the hero of state-controlled Russian TV.

But this support for Putin's world view goes way beyond Tucker Carlson's fandom. In a recent YouGov poll, 62 percent of Republicans said that Putin is a stronger leader than Biden. Back in 2014, Franklin Graham praised the Russian president for his crack-down on gay rights and wrote that Putin was preferable to then-President Obama, while Pat Buchanan declared that Putin is "one of us" when it comes to fighting the culture wars. Ja’han Jones documented the fondness one group of Trump supporters feel for Putin.

None of that came about by accident. For years, Putin has been courting the groups that make up the current base of the Republican Party: white nationalists, Christian nationalists, and gun rights groups. Putin not only sent his own emissary to a white nationalist meeting in Hungary in 2014, he actually hosted one in St. Petersburg a year later.

Casey Michael documented how Russia became the global leader of the Christian right. That is quite an about-face from the days when the Soviet Union was seen as a threat by these same groups for their spread of “godless communism.” But Putin has been working on that transformation for a while now, starting with his embrace of the Russian Orthodox Church. His rhetoric about the West shifted as well.

“We can see how many of the Euro-Atlantic countries are actually rejecting their roots, including the Christian values that constitute the basis of Western civilization,” he said at a conference in 2013. “They are denying moral principles and all traditional identities: national, cultural, religious, and even sexual … They are implementing policies that equate large families with same-sex partnerships, belief in God with the belief in Satan.” By succumbing to secularism, he noted on another occasion, the West was trending toward “chaotic darkness” and a “return to a primitive state.”

Finally, Denise Clifton and Mark Follman put together an excellent timeline of how ties between Russia and the NRA developed over the years. A Tennessee lawyer named G. Kline Preston first introduced David Keene, then the NRA’s president, to a Russian senator, Alexander Torshin in 2011. Bringing together the overlap between white nationalists, Christian nationalists, and gun rights groups, Preston once said that "the value system of Southern Christians and the value system of Russians are very much in line...we’re very similar people, in a lot of our values, our interests and that sort of thing.” Of course, unsaid is the fact that when Preston refers to "Southern Christians," he's actually talking about Southern White Christians.

The one thing we can take from all of this is that, as Putin ratchets up the pressure on Ukraine and Biden uses 21st Century diplomacy to  ease tensions, the MAGA crowd will take the side of a foreign dictator over our own president. That will only empower Putin, whose goal has always been to "sow discord and disunity within the U.S."