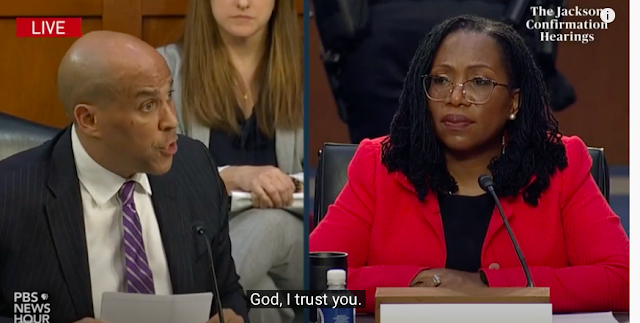 During the confirmation hearings for Judge Ketanji Brown Jackson, Republicans on the Senate Judiciary Committee have accused her of supporting efforts to claim that all infants are racist, being soft on child pornographers and generally being soft on crime.

Republicans like Cruz, Hawley and Kennedy couched their racist attacks in a thin veneer of respectability, while Cotton was openly aggressive and contemptuous of Jackson. She occasionally showed hints of anger, but handled it all with incredible competence, grace and dignity. This comparison is worth noting:

I was reminded of this quote from Jonathan Chait about the movie "Twelve Years a Slave."

Notably, the most horrific torture depicted in 12 Years a Slave is set in motion when the protagonist, Solomon Northup, offers up to his master engineering knowledge he acquired as a free man, thereby showing up his enraged white overseer. It was precisely Northup’s calm, dignified competence in the scene that so enraged his oppressor. The social system embedded within slavery as depicted in the film is one that survived long past the Emancipation Proclamation – the one that resulted in the murder of Emmett Till a century after Northup published his autobiography. It’s a system in which the most unforgivable crime was for an African-American to presume [herself] an equal to — or, heaven forbid, better than — a white person.

Beyond the outright racism directed at Judge Jackson, that is the underlying element of the contempt shown to her: "how DARE she presume to be an equal to - or heaven forbid, better than - me."

But then, immediately after Cotton's diatribe and eleven hours into questioning, came the only African American on the Judiciary Committee - Senator Cory Booker. That's when this happened:

When your eyes finally connect with the other Black employee after a racist tirade during a work meeting. pic.twitter.com/aYxAI1vzUg

I encourage you to take the time to watch this clip of how Booker used his time.

Booker began by debunking some of the most egregious attacks on Judge Jackson and then pointed out that she has been endorsed for a seat on the Supreme Court by police officers, victim's advocacy groups, and Republican judges. Then he reminder her: "That's who's in your corner." He followed that up with this:

I've just watched you with dignity and grace field what I can only imagine is behind those questions. This is doubt that is being sown. I just want America to know that when it comes to my family's safety, when it comes to Newark, New Jersey or my state, God, I trust you. I trust you.

At that moment, you can see Judge Jackson sigh in relief. I can't tell if she teared up, but I sure did!

Like me, you've probably seen lots of clips and stories about the awful things Republican Senators said during these hearings. Booker's questioning hasn't gotten that kind of attention - perhaps because we want to feed our anger.

But the senator from New Jersey just gave us a master class on how to be an ally. He didn't settle for simply debunking the attacks on Judge Jackson. He built her up in the midst of others trying to tear her down. He gave her room to breath again, shoring up her ability to continue to take on those attacks with dignity and grace. Booker focused - at least for a moment - on what Judge Jackson needed rather than use his time to preen for the camera in order to score political points. That's precisely what it means to have empathy.