For Those Who Are Tired, Frustrated, and Discouraged 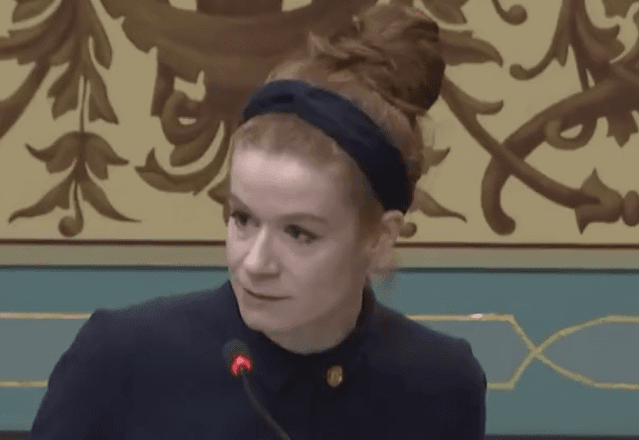 Molly Jong-Fast has done us all a favor by identifying what made the speech by Michigan State Senator Mallory McMarrow so powerful. Unfortunately the title - "Democrats Need to Stand Up for Themselves" - didn't do her piece justice because her analysis went much deeper than it implies.

McMorrow proved that rebuttal can be done effectively—and she succeeded because her rebuke rested on a personal narrative.

Here's the advice Jong-Fast got from McMarrow:

I'm going to drop the speech in here so that you can listen to it again to see how McMorrow did that.

Senator Lana Theis accused me by name of grooming and sexualizing children in an attempt to marginalize me for standing up against her marginalizing the LGBTQ community...in a fundraising email, for herself.

Hate wins when people like me stand by and let it happen. I won't. pic.twitter.com/jL5GU42bTv

In writing this piece, Jong-Fast took her own advice and told the story about why McMorrow's words resonated with her personally.

I learned it myself in 1997, in the Lily unit of Hazelden Rehab, in Center City, Minnesota. I was a 19-year-old drug addict trying to kick cocaine and alcohol and everything else. I showed up at Hazelden wearing heavy, dark eye makeup, my bag filled with controlled substances, convinced that no one had ever felt the way I felt. The next four weeks in Minnesota taught me the power of narrative, because the stories I heard from the other people there saved my life. Again and again, people told me their stories, and again and again, I related to their loss, their hardship, their loneliness...It was these stories that convinced me that I could get sober too. And I did. I’m not sure I could have without the power of the first-person narrative.

The first time I remember thinking about the power of stories was back in the 1970's when I read a couple of novels by the Catholic priest, Andrew Greeley. I was just beginning to think through some of the questions I had about religion and the stories he told resonated with me at an incredibly deep, powerful level. When criticized for his writing, Greeley responded by saying that there is a reason why, in the New Testament Gospels, Jesus rarely engaged in discussions about theology with the Pharisees. Instead, he told them parables.

In 2008, when I became fascinated by Barack Obama's presidential campaign, I began reading about Marshall Ganz, who had been hired to develop "Camp Obama." Ganz, who teaches community organizing at Harvard, learned his craft by being involved in the Civil Rights Movement in Mississippi and then with Cesar Chavez and the United Farm Workers in California. He writes and lectures on the topic of why stories matter.

To summarize, I'm going to start where Ganz ends.

In a world of inertia and cynicism, how do we mobilize power in the fight for justice?

The difference in how individuals respond to urgency or anxiety (detected by the brain’s surveillance system) depends on the brain’s dispositional system, the second system in the brain, which runs from enthusiasm to depression, from hope to despair. When anxiety hits and you’re down in despair, then fear hits. You withdraw or strike out, neither of which helps to deal with the problem. But if you’re up in hope or enthusiasm, you’re more likely to ask questions and learn what you need to learn to deal with the unexpected.

But you can't just go around telling people to be hopeful. We do that by telling stories.

A story communicates fear, hope, and anxiety, and because we can feel it, we get the moral not just as a concept, but as a teaching of our hearts.

Interestingly enough, Ganz says that storytelling is natural for all of us, but we go to school to learn how to NOT tell stories. So sometimes we have to get back to the basics of how we've been motivating each other for centuries. He also says that when we start conversations by talking about issues, that is what divides us. Our stories are what unite us and lay the groundwork for discussions about issues.
It was Ganz who first explained to me why the speech Barack Obama gave at the 2004 Democratic Convention resonated so profoundly with the people of this country. As another example, I'd point to an exchange between Joe Biden and Rev. Anthony Thompson that took place at a town hall in Charleston, South Carolina right before the 2020 primary in that state. Conventional wisdom is that Biden's overwhelming victory two days later can be attributed to an endorsement from Rep. Jim Clyburn. I would suggest that this response played a major role.
Senator McMorrow is part of a long tradition of people who have used their own personal story as a way to mobilize power in the fight for justice. She's still at it.

The truth is that Black, LGBTQ, and other marginalized people have been fighting alone for too long. That’s how we got here.

Honestly, I’m sorry I’m late. To all the other people like me, it’s our turn. We’re late, but we’re not too late.

Personally, I'd like to thank her for reminding me of the power of story and for sending out a dose of hope to those of us who've been feeling tired, frustrated, and discouraged. If you need a little more, here's a story that might be just what the doctor ordered.