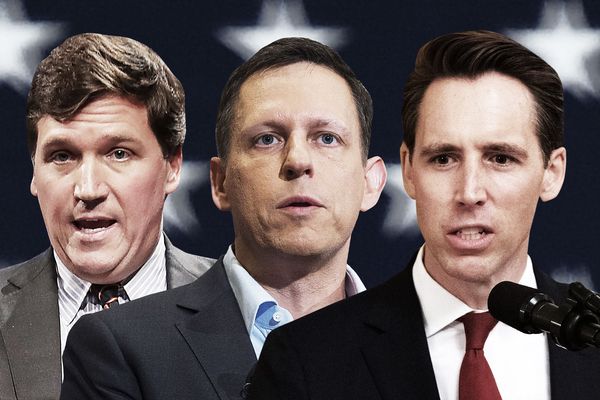 I didn't initially write about Governor DeSantis signing the bill to punish Disney World because I wasn't sure exactly what was going on. What confused me went beyond the headlines to items like this tucked away at the end of articles about the legislation.

“Nothing is going to happen,” said Jason Pizzo, a Democrat who represents the state’s 38th Senate district, during the special session Wednesday. “Everyone in this room knows this is not going to happen."

The revocation of Disney's special district doesn't go into effect until next summer and obviously there are those who know the details and are suggesting that this is nothing more than another performative stunt being pulled by a Republican governor. In other words, DeSantis gets to brag about being a true fighter in the culture wars, but the receipts never come due.

But then I started reading about those on the right who are referring to themselves as "national conservatives" (NatCons). In writing a taxonomy of that group, Matthew Continetti describes them as "post-liberals."

The post-liberals say that freedom has become a destructive end-in-itself. Economic freedom has brought about a global system of trade and finance that has outsourced jobs, shifted resources to the metropolitan coasts, and obscured its self-seeking under the veneer of social justice. Personal freedom has ended up in the mainstreaming of pornography, alcohol, drug, and gambling addiction, abortion, single-parent families, and the repression of orthodox religious practice and conscience...

The post-liberals say that the distinction between state and society is illusory. They argue that, even as conservatives defended the independence of civil society from state power, the left took over Hollywood, the academy, the media, and the courts. What the post-liberals seem to call for is the use of government to recapture society from the left.

For all the talk of "freedom" on the right, these folks don't think that's a good thing. Continetti wrote that the elected official who best captures this thinking is Sen. Josh Hawley, pointing to a commencement speech he gave at Kings College in 2019.

For decades now our politics and culture have been dominated by a particular philosophy of freedom. It is a philosophy of liberation from family and tradition; of escape from God and community; a philosophy of self-creation and unrestricted, unfettered free choice.

Hawley actually made the twisted argument that being free to define one's self leads to hierarchy and elitism...I kid you not!

According to these folks, it is imperative that the government be used to "recapture society from the left" in order to address all of the ills brought about by both economic and personal freedom.

About the time Hawley gave that speech there was a dust-up between Never Trumper David French and NatCon Sohrab Ahmari that was all about shaping the post-Trump conservative movement and the GOP. The position of Ahmari and his cohorts is that conservatives like French have been too "civil" in the culture war.

Yes, the old conservative consensus paid lip service to traditional values. But it failed to retard, much less reverse, the eclipse of permanent truths, family stability, communal solidarity, and much else. It surrendered to the pornographization of daily life, to the culture of death, to the cult of competitiveness. It too often bowed to a poisonous and censorious multiculturalism.

Ahmari's alternative is "to fight the culture war with the aim of defeating the enemy and enjoying the spoils in the form of a public square re-ordered to the common good and ultimately the Highest Good."

James Pogue recently published a piece about attending the National Conservatism Conference in Orlando last fall (which is where Hawley gave his speech on the threat to masculinity). In it, he describes some of the leaders of this movement. The billionaire funder is Peter Thiel, who once wrote that he no longer believes that "freedom and democracy are compatible." The so-called "intellectuals" are people like Curtis Yarvin, and, or course, Ahmari. Here's part of how Pogue described the "thinking" of Yarvin:

[T]he way conservatives can actually win in America, he has argued, is for a Caesar-like figure to take power back from this devolved oligarchy and replace it with a monarchical regime run like a start-up. As early as 2012, he proposed the acronym RAGE—Retire All Government Employees—as a shorthand for a first step in the overthrow of the American “regime.” What we needed, Yarvin thought, was a “national CEO, [or] what’s called a dictator.” Yarvin now shies away from the word dictator and seems to be trying to promote a friendlier face of authoritarianism as the solution to our political warfare: “If you’re going to have a monarchy, it has to be a monarchy of everyone,” he said.

Thiel is currently bankrolling the senate candidacies of his former COO Blake Masters in Arizona and J.D. Vance in Ohio. Because Vance wanted to talk off the record, Pogue retrieved this from a podcast interview Vance had done with Jack Murphy, the head of the Liminal Order men’s group.

“I tend to think that we should seize the institutions of the left,” he said. “And turn them against the left. We need like a de-Baathification program, a de-woke-ification program.”...

“And when the courts stop you,” he went on, “stand before the country, and say—” he quoted Andrew Jackson, giving a challenge to the entire constitutional order—“the chief justice has made his ruling. Now let him enforce it.”

As an example of what Vance is referring to, he once talked with Tucker Carlson about seizing the assets of charitable groups like the Ford Foundation. Of course, doing that to institutions simply because they are on the other side of the culture wars would be, at minimum, unconstitutional, and perhaps even a crime. So ominously, Vance suggested that he would simply ignore the courts.

All of this shines a whole new light on what DeSantis is doing to Disney World. He seems to have lined up with the National Conservatives. It's also in line with what 18 Republican House members did to threaten Twitter's board when they initially balked at accepting Elon Musk's offer to buy the company.

Charles Sykes is absolutely right that none of this has anything to do with populism. But it also isn't simply about grievance. It is about turning what we've come to casually refer to as "culture wars" into an actually war for power. Jonathan Chait got this one right.

This is one way rulers like Orban and Putin hold power. It is a method that, until quite recently, would have been considered unthinkable in the United States. That bright line has been obliterated.

The call now among some Republican commentators for the state to take action against Disney, to revoke its special privileges on copyright to retaliate for its indoctrination of American children, is a pure Orban move. We need to see more of it. Republicans have been so prostrate before Big Business that they have sat there like idiots while Woke Capitalism organizes to turn conservative values of faith and the traditional family into pariahs among the young. Either we on the Right will learn from Viktor Orban how to use politics to fight this, or we will be defeated.

As I've mentioned before, I don't tend to be an alarmist. But in my 60+ years on this planet I never would have envisioned that we'd be hearing fascist talk like this coming from politicians and political commentators in the United States of America. It is terrifying. If you're not seeing the makings of Gilead from The Handmaid's Tale, then you're not paying attention.

It is beyond time for all of us to take stock of what is happening in our country. We must stand up, speak out, and vote like our lives depended on it...because they do!