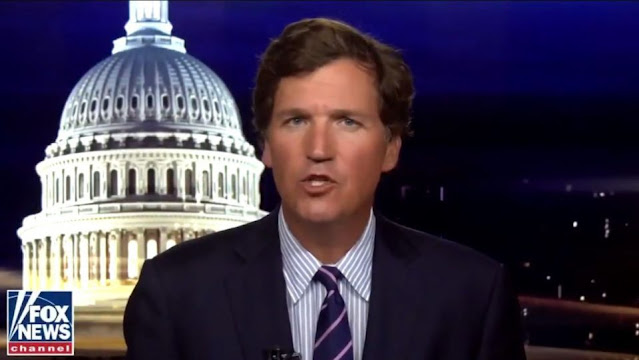 Following the terrorist shooting in Buffalo on Saturday, Tucker Carlson initially distanced himself from the great replacement theory that obviously motivated the shooter. But then on Tuesday night, he actually tried to turn the tables and suggest that it was Democrats who embraced the theme of replacement - I kid you not!

You've heard a lot about the great replacement theory recently. It is everywhere in the last two days and we are still not sure exactly what it is. Here's what we do know for a fact. There is a strong political component to the Democratic Party's immigration policy. We are not guessing this. We know this. And we know it because they have said so. They have said it again and again and again.

It's almost amusing to hear him say that he's not sure exactly what the great replacement theory is all about - especially since he's talked about it over 400 times on his show. But then he claimed that the Democratic Party's immigration policy is all about replacement. Carlson goes on to provide video clips and references to articles, claiming that they make his point.

One example will suffice to demonstrate the lie that is embedded in Carlson's claim. He points to an article by Ana Navarro from back in 2013 titled "Old, White, Straight, Male Voters Ain't What They Used to Be." Here's what she wrote:

The evidence is everywhere and starkly undeniable after the 2012 presidential race: old, white, straight, male voters just aren’t enough to win elections anymore. Mitt Romney got the highest ever percentage of these voters, and the lowest ever percentage of the minority vote. He lost. The demographic trends show that the minority vote in the United States will continue to grow in numbers and influence. Unless you are under the influence of hallucinogens, it is hard to imagine future scenarios were the Republican Party can win national elections if we do not succeed in attracting more than just the “usual suspects” to the Republican tent.

Of course, Navarro is a Republican political consultant and her take was echoed by Senator Lindsey Graham who said, "The demographics race we’re losing badly. We’re not generating enough angry white guys to stay in business for the long term.” But it was Jeb Bush who was the first one to sound the alarm during a 2012 interview with Joe Hagan.

Sitting down across from me, he assumes his role as party Cassandra, warning of the day when the Republicans’ failure to tap an exploding Hispanic population will cripple its chances at reclaiming power—starting in Texas, the family seat of the House of Bush.

“It’s a math question,” he tells me. “Four years from now, Texas is going to be a so-called blue state. Imagine Texas as a blue state, how hard it would be to carry the presidency or gain control of the Senate.”

Following Romney's loss to Obama in 2012, that was the prevailing "wisdom" among Republicans, as was outlined in their autopsy.

In the last election, Governor Romney received just 27 percent of the Hispanic vote. Other minority communities, including Asian and Pacific Islander Americans, also view the Party as unwelcoming...As one conservative, Tea-Party leader, Dick Armey, told us, "You can't call someone ugly and expect them to go to the prom with you. We've chased the Hispanic voter out of his natural home."

In other words, almost a decade ago it was Republicans who were noticing that, unless they did a better job of reaching out to Hispanics and other "minority groups," their party was doomed.

Contrary to what Carlson suggested, the math on that is not dependent on Democrats bringing in illegal foreigners to replace white people, as the Washington Post reported back in 2018 (emphasis mine).

Experts say the main driver of diversification in the United States is the native-born Hispanic population, which grew by about 5 million from 2010 to 2016, just as the native-born white population shrank by about 400,000 over the same period, according to Census Bureau data...

“You can shut the door to everyone in the world and that won’t change,” said Roberto Suro, an immigration and demography expert at the University of Southern California...“If your primary concern is that the American population is becoming less white, it’s already too late.”

According to Pew Research, the Asian-American population is growing even faster.

Asian Americans recorded the fastest population growth rate among all racial and ethnic groups in the United States between 2000 and 2019. The Asian population in the U.S. grew 81% during that span, from roughly 10.5 million to a record 18.9 million, according to a Pew Research Center analysis of U.S. Census Bureau population estimates, the last before 2020 census figures are released. Furthermore, by 2060, the number of U.S. Asians is projected to rise to 35.8 million, more than triple their 2000 population.

Most demographers predict that non-Hispanic white people will no longer be a majority in the U.S. in about 20 years. That cake has already been baked - regardless of what happens with immigration reform.

Those are the facts. And short of deporting U.S. citizens (or suppressing their votes) there's nothing Tucker Carlson and his white supremacist allies can do about it. So they conjured up a lie about hordes of brown immigrants invading our country from across the southern border as a way to gin up the kind of fear that leads to violence.

On a somewhat related note, Simon Rosenberg does an excellent job of debunking the idea that Democrats are losing the Hispanic vote. He points to the fact that the Hispanic vote went from 6 million in 2000 to 16.5 million in 2020. With that, the Democratic margin went from 1.6 million more votes in 2000 to 4.6 million in 2020. As Simon suggests, "A slightly smaller slice of a bigger pie means you still have more pie. In this case lots more pie." Results in the four heavily Hispanic states of Arizona, Colorado, Nevada, and New Mexico tell the tale.

In 16 years (2004-2020) Dems have picked up 31 Electoral College votes, 6 Senate seats, 8 House seats and 3 governorships in these 4 southwestern states. These Congressional gains are the reason Dems have majorities today in the Senate and House.

With so much political commentary focused on white working class voters in the Rust Belt, that story has been almost completely overlooked, but it speaks volumes about why Republicans are so afraid of "the browning of America."