Barr Got Exactly What He Wanted From Durham 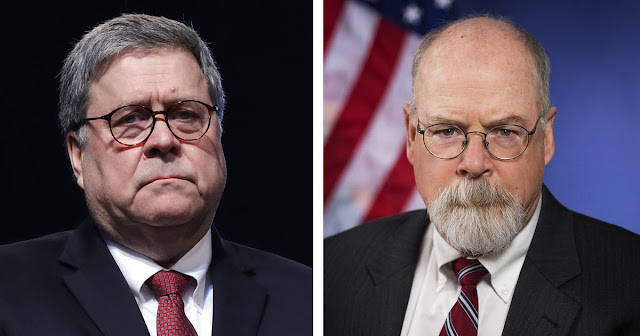 Back in February, I wrote that John Durham - who was appointed by William Barr to investigate the origins of the Trump-Russia probe - wasn't conducting a legal investigation, but had mounted a propaganda campaign.

[Durham] is in the business of mounting a propaganda campaign in an attempt to not only discredit the Mueller investigation, but to shift the focus from Trump and Putin to a nefarious conspiracy theory about Hillary Clinton.

This week a jury acquitted the one person Durham has charged - Michael Sussmann - in a case that no legal experts thought should have been brought in the first place. If his goal was to uncover criminal activity, the three-year investigation has been a complete and abject failure. So perhaps it would be helpful to go back to the beginning when Barr issued the memo making Durham a special prosecutor. Here's how Charlie Savage summarized it:

Mr. Barr’s memo was broadly written and vague. It did not identify any suspected crime that could serve as a predicate for a continuing criminal investigation, or any particular person whom Mr. Durham was to focus on. Nor did it claim a foreign threat that would constitute any separate counterintelligence basis for an inquiry, as with the Trump-Russia investigation.

Mr. Barr also directed Mr. Durham to write a report detailing his findings that would be intended for public consumption...The special counsel regulations do not envision such a report.

Just before he resigned as attorney general, Barr indicated that the investigation he had tagged as "criminal," shouldn't be judged based on crimes that were uncovered. Here is how Kimberly Stassel summarized what he told her:

The attorney general also hopes people remember that orange jumpsuits aren’t the only measure of misconduct. It frustrates him that the political class these days frequently plays “the criminal card,” obsessively focused on “who is going to jail, who is getting indicted.”…One danger of the focus on criminal charges is that it ends up excusing a vast range of contemptible or abusive behavior that doesn’t reach the bar.

Now that Durham's case against Sussmann has been tossed out by a jury, Barr insists that he's proud of the work the special prosecutor is doing.

Barr: I’m very proud of Durham and I do take responsibility for his appointment. pic.twitter.com/odKy2FaqKG

Barr says that Durham accomplished something far more important than a conviction in that "he crystalized the central role played by the Hillary campaign in launching, as a dirty trick, the whole Russiagate collusion narrative." Just as he blatantly lied about the Mueller report, Barr is now lying about what Durham has actually uncovered.

Similarly, the editorial board of the Wall Street Journal proclaimed in a headline that "Hillary Clinton Did It." The opening statement mirrors Barr's lie: "The Russia-Trump collusion narrative of 2016 and beyond was a dirty trick for the ages, and now we know it came from the top—candidate Hillary Rodham Clinton." At The Federalist, Margot Cleveland wrote that Durham has provided "proof that the Clinton campaign held near-total responsibility for launching the Russia-collusion hoax."

So Barr - and by extension, Donald Trump - have already gotten exactly what they were looking for from Durham.

One thing I can say for Barr is that he definitely knows how to play the media. By lying about the Mueller report and Durham's investigation, he has convinced the MAGA crowd that the whole Trump-Russia investigation was a hoax perpetrated by the Clinton campaign. And now writers like Charlie Savage at the New York Times can "both sides" the whole story about how a presidential campaign colluded with Russia to influence the election and then obstructed justice when their activities were investigated..

Some liberal commentators once seemed to routinely suggest that developments in Mr. Mueller’s investigation meant the walls were closing in on Mr. Trump. But while Mr. Mueller’s March 2019 reportdetailed “numerous links between the Russian government and the Trump campaign,” he charged no Trump associate with conspiring with Russia.

Similarly, pro-Trump commentators have repeatedly stoked expectations that Mr. Durham would soon charge some of Mr. Trump’s perceived enemies with a conspiracy to do him wrong. But after more than three years, he has offered only insinuations.

In case you need a little grounding in the truth after all of that lying and prevaricating, I'll simply offer this: