DeSantis Stepped in a Pile of Manure. Will the Media Ever Catch On? 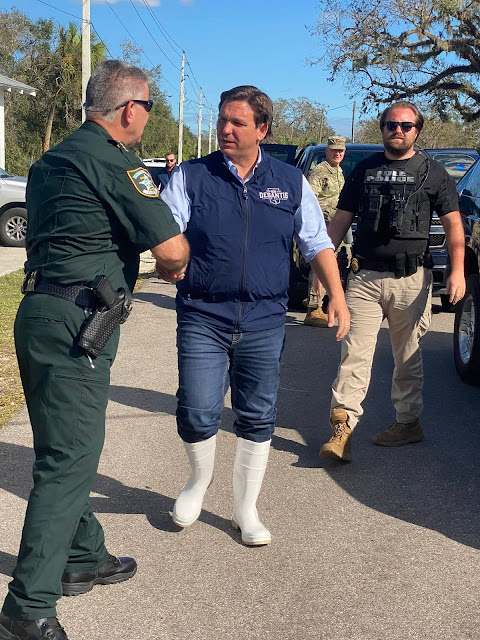 Tuesday evening, Trump announced that he will run for president again in 2024. After tagging his potential opponent as "Ron DeSanctimonious," the governor of Florida shot back with this:

“All that’s just noise. What really matters is, are you leading … are you delivering results … I would just tell people to go check out the scoreboard from last Tuesday night.” pic.twitter.com/vQ515uuj47

Frankly, I don't know what's going to happen to the Republican Party over the next two years. We all know that Donald Trump is just another disaster waiting to happen. But the line on DeSantis in much of the media is that he's the "normal" (ie, not crazy) alternative who actually knows how to govern and get results.

Excuse me, but I don't think that someone who goes on a rant like this in a fundraising email qualifies as "normal."

Our country is currently facing a great threat. A new enemy has emerged from the shadows that seeks to destroy and intimidate their way to a transformed state, and country, that you and I would hardly recognize...

This enemy is the radical vigilante woke mob that will steamroll anything and anyone in their way. Their blatant attacks on the American way of life are clear and intensifying: stifling dissent, public shaming, rampant violence, and a perverted version of history.

When it comes to "delivering results," I'll just remind you of the fact that DeSantis is pretty much "all hat and no cattle." Over the coming months it will be interesting to watch whether the media catches on to that.
As just one example, the Florida governor garnered a lot of attention for taking on Disney by supposedly stripping them of their special district status. What we didn't hear very often is that the bill passed by the state legislature punted the process down the road and it's not scheduled to take effect until next summer. In the meantime, we learned that if the special district is actually dissolved, taxpayers in Orange and Osceola counties will be responsible for the $1 billion in bond debt Disney currently holds.
What's going to happen is that sometime between next month (a December special session) and June 2023, DeSantis and the legislature have to figure out what to do about that. According to the Orlando Business Journal, they have three options:
1. Delay the dissolution date,
2. Retain the district and amend certain powers, or
3. Change/replace the district's charter.
In other words, there is NO scenario where Disney's special district status simply goes away.
The simplest solution would be #2. But that would mean that DeSantis winds up with a good deal of egg on his face. Some people are suggesting that #3 is the course the governor will take.

“The governor will establish a new district. That’s our latest word under the general-purpose government controlled by the governor, with appointments by the governor,” Florida State Sen. Linda Stewart (D) who represents parts of Orange County, said.

That sounds like exactly the kind of thing DeSantis would do, but here's the catch: it would still leave Florida taxpayers on the hook for the #1 billion. In addition, "it would require a 30-day public notice, discussions and approvals by delegations in the affected counties — Orange and Osceola counties — and other processes needed before a vote were allowed."
I'm sure DeSantis will try to muscle his way around all of these obstacles. But there's one thing he can't do: f*ck around with the municipal bond market.
One thing we know about DeSantis is that he doesn't like being corrected, much less being proven wrong. But he stepped in a deep pile of cow manure on this one and is going to need to repurpose those white boots to wade through it. To twist the metaphor, it will be interesting to watch what the media does when the shit he flung starts to hit the fan.
at November 16, 2022