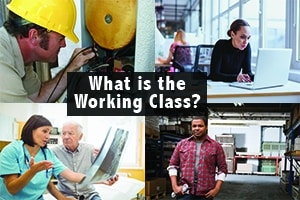 There is a group of pundits who focus most of their time setting their hair on fire over the idea that Democrats are losing ground with working class voters. Ron Brownstein calls them neo-New Democrats. While I tend to disagree with their proposed strategies, it is also important to set the record straight on what they mean by working class voters.

The truth is that we really don't have a definition of what we mean by working class. The word "class" indicates that level of income is determinative. But for some reason, that definition is rejected. Instead, level of education is substituted - suggesting that those without a college degree are working class.

In order to analyze the accuracy of that assumption, it is helpful to have some data. For example, according to the Bureau of Labor Statistics, the median salary for a full-time employee in the United States is currently $53,490. So half of Americans make less than that and half make more.

I decided to cherry-pick some professions where the average salary is slightly less than the median and compare those that require a college degree to those that don't.

I was reminded of the fact that, in the early 90s - when I became the executive director of a small non-profit that required at least a bachelors degree for staff - my first order of business was to raise enough money to give everyone a salary increase. When I was successful, I met with each staff person individually to tell them what their new salary would be. One person told me that, for the first time, he'd be making as much money as he had as a landscaper.

For jobs that don't require a college degree, a few that make more than the median might surprise you. The average salary for a truck driver is $57,680 and pipe welders average $60,340. But here's the shocker: according to the USDA, the median total household income for farmers is $80,060. That's on par with a clinical psychologist, which requires at least a masters degree.

My point is that whether or not one has a college degree isn't always indicative of how much money one makes. As an aside, my cursory review seems to indicate that a more pronounced factor might be that professions where women have been the majority of workers seem to have lower salaries than those that have been dominated by men.

But here's something to keep in mind: the less money you make, the less likely it is that you will vote (even more pronounced in midterms). 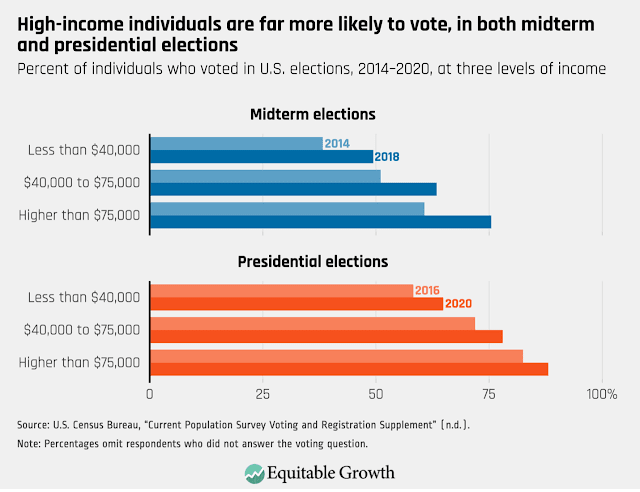 To the extent that we focus on income rather than education, we learn that Democrats are winning the support of people on the bottom. Perhaps the question we need to be asking is: "why aren't more of them voting?"
at November 24, 2022