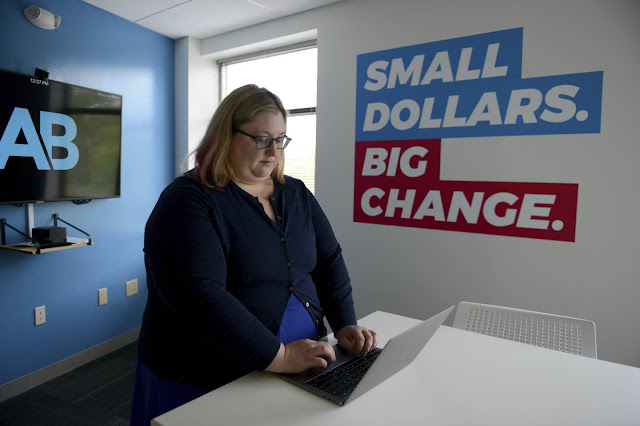 As pundits pour over the minutia that contributed to the outcome of the 2022 midterms, not many of them are paying attention to the fact that Democratic candidates outraised their Republican opponents 2:1. The closest I've seen is an article at the AP titled "GOP’s lackluster fundraising spurs post-election infighting." Here's some of the data they reported:

It is important to keep in mind that the contributions described above were made directly to the candidate's campaigns. Where Republicans tend to make up ground is in big money contributions to super PACs. But those dollars come with some major restrictions. Super PACs can't coordinate directly with campaigns, which limits their ability to get involved in grassroots efforts to engage and mobilize voters. As a result, their money is primarily spent on television ads. But the kicker is that television stations are required by law to sell air time to candidates at their cheapest rate. But that doesn't apply to super PACs. Here are some examples of the difference:
Super PACs get much less bang-for-their-buck in the TV ad game. But this isn't a problem that just emerged in 2022. As I've been writing, the same discrepancies plagued Republicans in 2018 and 2020. The problem facing the GOP in trying to correct the imbalance stems from their affinity for corruption.
Since the success Democrats have had with grassroots fundraising was enabled by the web site ActBlue, Republicans attempted to replicate it with their own - WinRed. But last summer the watchdog group, Campaign Legal Center, filed a complaint with the FEC about the site's lack of transparency.

Someone’s secretly getting very rich off WinRed. Voters have a right to know who. https://t.co/ZdrRBlmcQo

Similarly, Senator Rick Scott - who chaired the National Republican Senatorial Committee - seems to have blown much of the money he raised on questionable activities. In addition to spending enormously on paid consultants who didn't produce anything, the NRSC did this:

The committee would send text messages that didn’t say who they were from, but simply said: “This is URGENT! Do YOU support Trump? Reply YES to donate $25.” Users who replied yes, had their credit cards charged (thanks to their numbers being on file with payment processing company WinRed), and that was it.

Not surprisingly, Goldmacher notes that the amount the committee has had to refund has quadrupled since 2020.

With the Georgia senate run-off just around the corner, here's Scott's latest scam:

New fundraising email from NRSC chair Rick Scott asking to help Herschel Walker, who "needs as much support as he can get." But 98% of the money is automatically allocated to the NRSC. Of the remaining 2%, Rick Scott himself gets as much as Herschel does. https://t.co/XfxvnZ2Cbj pic.twitter.com/WywgcbRsTT

Of course, the one person in the GOP who can potentionally raise small donor contributions from his MAGA followers is their leader. But...

[Donald Trump] was parsimonious when it came to sharing some of the more than $100 million he’s amassed in a committee designed to help other candidates. He ended up spending about $15 million on ads across five Senate races, records show.

In other words, it's all a grift for these guys.

Democrats have never been very good at celebrating their success stories. But this one is about a couple of techies who started with an original idea back in 2004. Folks began to notice by 2007.

Operating from an office just off Harvard Square, Matt DeBergalis and Ben Rahn, through the Web site they created, ActBlue.com, have raised $32 million since it was started in 2004. They are gearing up to make good on their promise that it will raise $100 million for Democrats in this election cycle.

In many ways, ActBlue has turned fund-raising on its head by exploiting the power of the Internet and small donors that was pioneered by Howard Dean and bringing it to the next generation of grass-roots supporters and online donors.

Where big-dollar fund-raising is typically done behind closed doors with well-connected bundlers and showy, costly fund-raisers, ActBlue is just the opposite. It is an Internet-based political action committee that lets Democratic candidates use their Web site as a portal to collect donations, making fund-raising cheap, and, for donors, as simple as a click of a mouse.

But this story might also be a metaphor. Someone should tell Republican donors that they're being duped. And if you can't trust a party with your contributions, it's pretty clear that you shouldn't trust them with your tax dollars either.