"I'm the guy doing his job"

A few months ago President Obama gave Speaker Boehner an option: either pass immigration reform before the August recess, or he would take executive action. I think Boehner was listening to the Chamber of Commerce and actually wanted to pass something. But the teapublicans stopped that from happening.

And so today we're hearing reports about what kind of executive action the President will take. The only question remaining is "how far will he go?" I think Greg Sargent found the sweet spot:


I tend to doubt that Obama’s move will be as ambitious as even some of the reports are indicating. But in the end, I hope the administration makes its decision based solely on what it genuinely determines is legally, rather than politically, possible.

As Sargent points out, the legal options have actually been provided to President Obama by Congress.


What Obama has done so far on immigration and what he’s likely to do in the future can be justified on the theory of prosecutorial discretion, the long-standing executive branch power to decide in which cases the law should be enforced, [University of California professor Hiroshi] Motomura said.

“We have a system that runs on discretion. There are 11 million people in the country who in theory are not supposed to be here. Congress has funded the capability to deport maybe half a million people a year,” the professor said.

Its a given that the administration has to use discretion in its deportation policy priorities since full implementation of the law (deporting all 11 million) has never been funded. The only question remaining is how that discretion is exercised. It is up to the chief executive to make that call.

When the President announces his executive action and Republicans start screaming about what a tyrant he is, lets remind them that they are the ones who gave him this authority.

This has always been the bugaboo in the Republican position on immigration reform. They can't come out and say that they want to deport 11 million people...its just not feasible. If you remember, that's why Romney came up with his ridiculous notion of "self deportation" during the 2012 Republican primary debates and Newt Gingrich got in such hot water with the base for suggesting deportation wasn't a good idea.


"I don't see how the party that says it's the party of the family is going to adopt an immigration policy which destroys families that have been here a quarter of a century," said Gingrich.

Of course talk like that has the Laura Ingraham's of the party crying "amnesty!!!!"

The Republicans are gridlocked because they can't agree on what to do to resolve this most basic problem. In the meantime, President Obama will use the authority given to him by Congress to craft a policy that begins to address it. In other words... 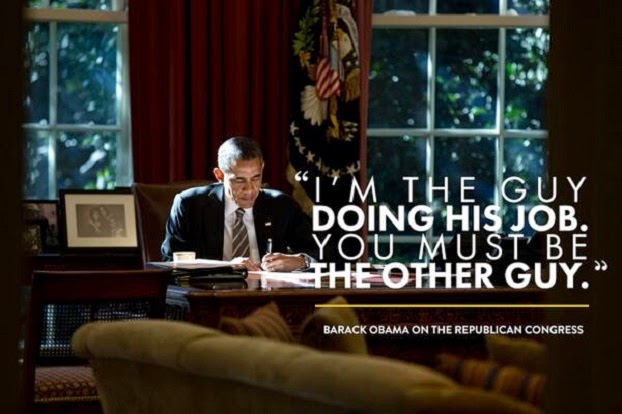