"The myth of American omnipotence" 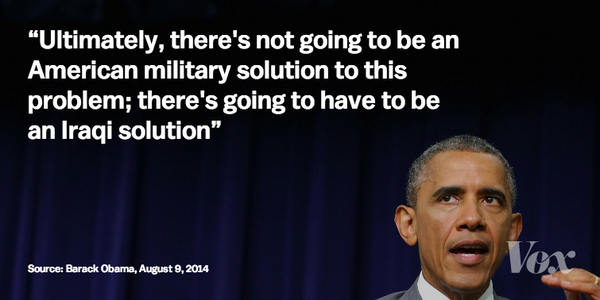 From this liberal's perspective, most of what has gone wrong in American foreign policy has happened when - due to ideology or corporate interests - we have assumed that we can dictate what happens in other countries (usually through either covert or overt military intervention).

From both a pragmatic and ideological perspective, President Obama has consistently rejected that path. He is steering our ship of state in a different direction...one where we provide assistance, advice, support - but the end result is up to the people of individual countries to decide.

This requires a big change in our view of how the world works. We have to give up our assumptions of control via dominance and embrace the possibilities of partnership. When we see pundits and neocons reacting to President Obama's strategy in Iraq, the resistance to that change is on display.

This morning President Obama gave a master class on all this at his press conference about Iraq. Michael Cohen captured the reason so many don't get it.

The myth of American omnipotence is a hell of a drug
— Michael Cohen (@speechboy71) August 9, 2014


We've been fed this myth so consistently that - like an addict - we can't see that it is the cause of our problems rather than the solution. When challenges arise around the globe, we simply look for another "fix," even though it never works.

The path President Obama is suggesting as an alternative is hard. That's because it requires that we give up the idea that we can control things and join him in his "shocking, almost certifiable faith in humanity" to chart their own course. Of course, almost 240 years ago, some folks staked a pretty important claim on that same shocking, almost certifiable faith in humanity.


We hold these truths to be self-evident, that all men are created equal, that they are endowed by their Creator with certain unalienable Rights, that among these are Life, Liberty and the pursuit of Happiness. — That to secure these rights, Governments are instituted among Men, deriving their just powers from the consent of the governed...