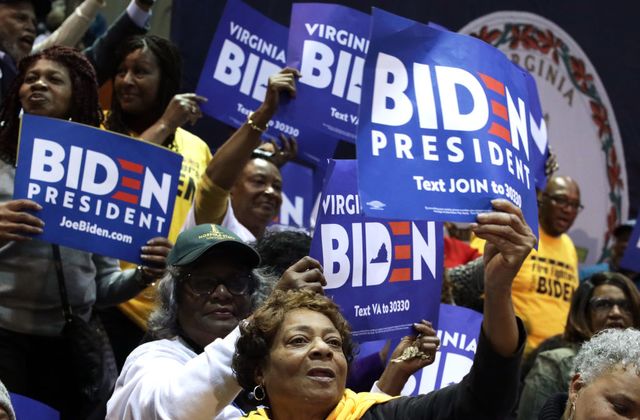 On his 50th day in office, President Biden signed the most significant piece of legislation passed in decades  and gave a speech calling for unity to combat the pandemic. As Jamelle Bouie wrote, Biden knew he was onto something long before we did.

Last year, as he steamrolled his way to victory in the Democratic presidential primaries, Joe Biden told CNN that the pandemic was “probably the biggest challenge in modern history, quite frankly.”

“I think it may not dwarf but eclipse what F.D.R faced,” he added.

Biden referred to Franklin Roosevelt again in an interview with Evan Osnos of The New Yorker. “I’m kind of in the position F.D.R was,” he said.

And a week before the election, Biden gave a speech at Roosevelt’s winter White House in Warm Springs, Ga., where he promised to “overcome a devastating virus” and “heal a suffering world.”

In other words, Biden telegraphed his F.D.R.-size ambition throughout the year. And the first major bill of his administration is in fact an F.D.R-size piece of legislation.

While the American Rescue Plan and Biden's speech were significant milestones, they come on the heels of 50 days in which most of us have been pleasantly surprised by what the president has accomplished in such a short time. Not only can we see a glimmer of light at the end of this pandemic's dark tunnel, Biden has set a new course for this country with executive orders and the quality of people he has put forward to lead the federal government.

I'll admit that, during the 2020 primaries, Joe Biden wasn't my first choice to win the nomination. He was in the middle of the pack of candidates I thought I could live with. But so far, he has vastly exceeded my expectations. Apparently I'm not the only one.

I have never underrated a public figure the way I underrated Joe Biden in 2020.

For those of us who watched the 2020 primary closely, it's clear that Biden won the nomination based on the support of African Americans in the south—particularly South Carolina. At the time, there was a lot of chatter about why they would chose an older white man from the most diverse field of candidates in our history. Conventional wisdom was that Rep. Clyburn's endorsement was the critical factor. But I think there was a lot more to it than that.

Just days before the South Carolina primary, Biden participated in a town hall meeting in Charleston. He fielded a question from Rev. Anthony Thompson, whose wife was one of the victims of the shooting at Emanuel African Methodist Episcopal Church.

That is the Joe Biden that African Americans saw—whether it was at that town hall meeting or previously. The reason Biden's words that day were so important had nothing to do with the policies he would promote as president. But what we heard was someone who has faced deep sorrow in his life and was willing to be vulnerable in sharing that with others. It is the root of Joe Biden's empathy. But there's something else we heard. Biden's sense of purpose is also rooted in that sorrow—it explains why he decided to run for president. That moment (and others like it) solidified the trust African Americans felt with Biden. And while a candidate's policy proposals are important, having trust in the person we elect as president is even more important.
Of course, what Black southerners saw in Biden is the polar opposite of what we had been living with from Donald Trump—a narcissistic sociopath—who was not only cruel, but incapable of doing anything except feed his own ego. In that way, Black voters in the south chose the one candidate who was most likely to offer healing to this country.
When it began to be clear that Biden would be the Democratic nominee, I made peace with that possibility by recognizing that, of all the candidates, the former vice president was best prepared to start rebuilding the federal government that had been decimated by Trump. In other words, I zeroed in on his experience and competence. That has been on display as he put his team together and is the reason we've seen so may positive achievements in just 50 days.
But it wasn't until Inauguration Day that I began to see the importance of what Biden displayed during that town hall in South Carolina. I know that hard-core Trump enablers probably can't be reached. But for the rest of us, Biden continually reminds us of what, as Americans, we are capable of being. And after four years of losing hope in those possibilities, we can find healing in that.
at March 12, 2021