The Fusion of White Supremacy, Christian Nationalism, and Misogyny 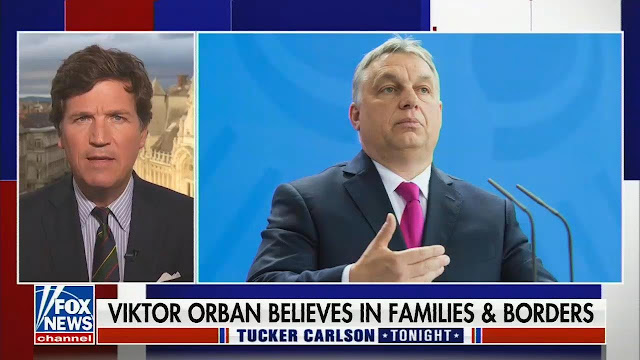 J.D. Vance, the Republican Senate candidate in Ohio, has made news lately by blaming the county's ills on childless liberals. As Philip Bump explained, Vance's pet issue is getting more Americans to have children.

While it is obviously women who have children, Vance focuses on how it benefits men.

But, [Vance] noted, he is always accused of being racist for elevating new children over population increases through immigration.

“There’s just no comparison between the positive effects of children and the positive effects of an immigrant,” he said. He insisted that he loved immigrants but added that “you can’t have so many people coming to the country at a time when our own families aren’t replicating themselves” — a parallel argument to the “White replacement theory” espoused by people such as Fox News’s Tucker Carlson.

“The idea that you can just replace children with immigrants,” he added, “is — it’s a sociopathic way of looking at the future.”

Carlson is in Hungary this week attempting to beef up support for Prime Minister Viktor Orbán. The picture above shows the chyron used just prior to his interview with Orbán. Note the conflation of "families" and "borders."

While much of the discussion about Orbán has focused on the ways he has consolidated power in Hungary to dismantle democracy, less attention has been payed to the fact that he has implemented a policy of "procreation not immigration," which embodies his version of replacement theory.

Hungary’s “procreation, not immigration” policies have their roots in “replacement theory.” This doctrine holds that white women are not producing enough babies and Christian, western civilizations will be “replaced” through the twin forces of falling birth rates and increasing immigration. Hungarian Prime Minister Viktor Orbán, for example, has argued that “there are political forces in Europe who want a replacement of population” and has vowed to fight those who want “an exchange of populations, to replace the population of Europeans with others.”

Riva Seigel and Duncan Hosie pointed out that all of this lays the groundwork for a union of anti-abortion and anti-immigration policies—or a melding of white supremacy, Christian nationalism, and misogyny—that took root in the Trump administration.

But the President has a growing number of supporters who understand opposition to abortion and immigration as intertwined—as means of preserving a white, Christian America. And the Trump Administration is taking concrete steps to encourage this ideational fusion.

As just one of the steps taken to encourage that fusion, Trump’s HHS provided $5.1 million Title X family-planning funds to an organization called Obria, which aims to be a pro-life alternative to Planned Parenthood. In 2015, Obria’s founder and current chief executive explained, “When [Europe’s] nations accepted contraception and abortion, they stopped replacing their population. Christianity began to die out. And, with Europeans having no children, immigrant Muslims came in to replace them, and now the culture of Europe is changing.” She warned that America is “on the same track as Europe” and that “[i]n only two of the past 40 years have we replaced our population.”

In other words, what we're seeing from all of this are the seeds for the kind of authoritarian misogyny Margaret Atwood portrayed in the Handmaid's Tale. That is terrifying.
at August 06, 2021