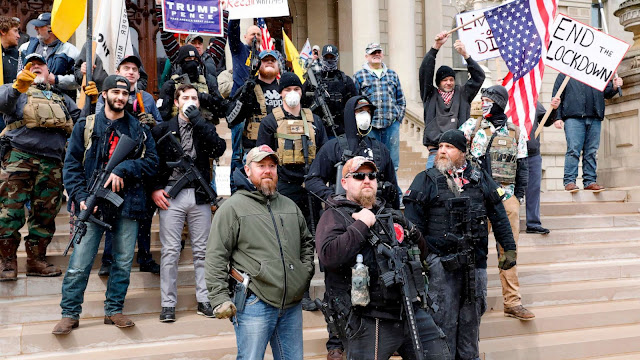 It became obvious a while ago that Donald Trump has some serious mental health issues, focused mostly on Narcissistic Personality Disorder.  But one of the problems with our current mental health system is that it tends to focus on individuals, failing to take context into account. When it comes to understanding the election of Trump, a study by Agnieszka Golec de Zavala, a senior lecturer in psychology at the University of London, started to fill in the gap.

“In another study, we found that collective narcissism was the strongest, after partisanship, predictor of voting for President Trump.”

So what is "collective narcism?" Here is how it was defined by Golec de Zavala:

Collective narcissism occurs when an exaggerated, inflated, and unrealistic view of the in-group compensates for creeping feelings of loss of dominance and declining importance, while also displaying a hypersensitivity to any out-group threats to the in-group’s image. Perhaps most relevant is the research showing a propensity for the in-group to aggressively retaliate and revel in the out-group’s misfortune when the in-group is criticized or feels insufficiently recognized or respected.

As Trump was preparing to run for president, white supremacists Richard Spencer tapped into how he was exploiting those "creeping feelings of loss of dominance."

“Trump, on a gut level, kind of senses that this is about demographics, ultimately. We’re moving into a new America.” He said, “I don’t think Trump is a white nationalist,” but he did believe that Trump reflected “an unconscious vision that white people have – that their grandchildren might be a hated minority in their own country. I think that scares us. They probably aren’t able to articulate it. I think it’s there. I think that, to a great degree, explains the Trump phenomenon.”

Keep in mind that collective narcissism doesn't depend on an actual loss of dominance, but a fear that it will happen, as Peter Hall, a professor of government at Harvard, explained.

The people most often drawn to the appeals of right-wing populist politicians, such as Trump, tend to be those who sit several rungs up the socioeconomic ladder in terms of their income or occupation. My conjecture is that it is people in this kind of social position who are most susceptible to what Barbara Ehrenreich called a “fear of falling” — namely, anxiety, in the face of an economic or cultural shock, that they might fall further down the social ladder,” a phenomenon often described as “last place aversion."

In other words, fear - not reality - is the culprit. That is precisely what right wing outlets like Fox News are promulgating with their embrace of replacement theory. As psychologist Nick Carmody explains, it is important to know about "the effect that fear......especially disinformation-induced fear......has on the collective human psyche."

From a neurobiological standpoint, the more evolved, cerebral cortex is located the furthest from the primitive brain stem....and contributes to the functions that make us distinctly human such as reason, judgment, and perhaps even our conscience because of its role in awareness/consciousness.

But fear is a primal response that originates in the amygdala, which is located closer to the primitive brain stem. Fear is an evolutionary response that helps guarantee survival. An animal relies on fear to instinctively engage a "binary" fight or flight response to survive. If there is any delay in cognitive processing, the animal risks being defeated in battle if it hesitates to “fight”....or risks being caught in “flight” if it hesitates to flee. Fight or flight requires animals to react first, and then think later, if at all. This is what has been occurring in American politics.

Decades of fear mongering/demagoguery have conditioned people’s primitive fear responses to be in a constant state of “hyper-vigilance” (not unlike PTSD)....which causes them to see enemies everywhere.....and to view everything as a "threat" to their survival. Demagogues have incited people to fear minor “threats” to status..., wealth, and lifestyle...

As a result, “threats” to a white, Christian, unregulated gun-owning society is equated to a literal existential threat to survival.

That is precisely the response Republican politicians are triggering with statements like this:

“The left’s attack is on America. The left hates America,” said Cruz. “It is the left that is trying to use culture as a tool to destroy America.”

“We are confronted now by a systematic effort to dismantle our society, our traditions, our economy, and our way of life,” said Rubio.

Obviously, "the left" is the out-group that poses an existential threat to the in-group of collective narcissists.

All of this forms the basis of grievance politics, which focuses on how right wingers are victims, whose way of life is under attack from the left. Here's the goal:

The reality is that it’s not about actual victimhood. It’s about perceived victimhood, and the need to keep 45% of this country in a "hyper- vigilant" state of perpetual victimhood...

The byproduct of this perpetual state of victimhood is that a number of otherwise decent people are incited into such an irrational emotional state that they not only tolerate intolerance....but, in some cases, they’re willing to embrace inhumanity.

That is where things get dangerous.

In our society, there is a belief that victims have a right to take extreme measures to defend themselves, up to and including, deadly force. In the law, there is a common law principle called the "Castle Doctrine" that allows people to use reasonable force (including deadly force) to protect themselves against an intruder in their home. This doctrine was codified by state legislatures with “stand your ground” statutes that expanded it to include public places.

As Lance Mannion once explained, Christian nationalists need to feel persecuted (emphasis mine).

[I]t feeds their self-pity and sense of entitlement, and it gives them their excuse...If they are under attack, then they’re free to fight back.

According to these folks, victims not only have the right to defend themselves, they have the right to strike preemptively to protect themselves. That is precisely what the defense attorneys in both the Kyle Rittenhouse and McMichael/Bryan trials claimed. In the same way, the January 6 insurrectionists believed that they were the victims of a stolen election, which justified their attack on the Capital. So we see this mindset creeping in to our culture as a justification for the escalation of violence on the right.

All of this is frightening and I have no idea how the story ends. But one thing I do know: if Democrats simply focus on policies (an appeal to reason and judgement), it isn't going to break through this fear-induced collective narcissism. To be honest, I don't have a lot of answers about what will break through. It's just clear to me that the place to start is to better understand what we're dealing with.