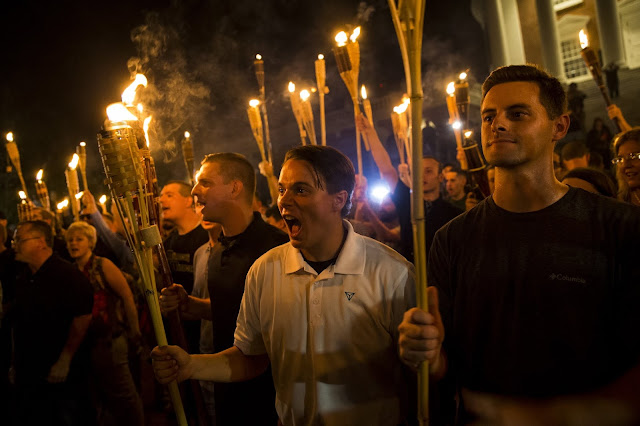 A little over four years ago, white supremacists protested the removal of a statue of Robert E. Lee in Charlottesville, VA while chanting "You will not replace us." Donald Trump's suggestion that the protesters were "good people" drew condemnation from almost every corner of the country - including many Republicans.

The slogan the protesters were chanting has a long history among white supremacists, reflecting their adoption of the "great replacement theory," that whites are being replaced by non-white immigrants from Africa and the Middle East, and the end result will be the extinction of the white race. The danger of this kind of rhetoric is demonstrated by the fact that it spurred killing sprees in Christchurch, New Zealand; Poway, California; and El Paso, Texas.
Nevertheless, the great replacement theory has been a staple on Fox News over the last couple of years.
But as I pointed out previously, this hate-filled message isn't just coming from Fox News hosts and guests. It has been picked up by Republican elected officials, candidates, and right wing commentators.
Wednesday night, Tucker Carlson was at it again. This time he claimed that, during remarks in 2015, Vice President Biden "explained the entire point of mass immigration." Carlson then showed a video clip of Biden saying this:

An unrelenting stream of immigration. Nonstop, nonstop. Folks like me who are Caucasian, of European descent, for the first time in 2017 we'll be an absolute minority in the United States of America. Absolute minority. Fewer than 50% of the people in America from then and on will be white European stock. That's not a bad thing. That’s a source of our strength.

Carlson went on to say this:

"An unrelenting stream of immigration." Why? Joe Biden said it. To change the racial mix of the country. That’s the reason. To reduce the political power of people whose ancestors lived here, and dramatically increase the proportion of Americans newly arrived from the third world. And then Biden went further and said that non-white DNA is the source of our strength. Imagine saying that. This is the language of eugenics. It’s horrifying. But there’s a reason Biden said it. In political terms, this policy is sometimes called the great replacement — the replacement of legacy Americans, with more obedient people from faraway countries.

Your first clue that something is amiss with that Biden quote is that it begins mid-sentence. He made the remarks as an introduction to a White House Summit on Countering Violent Extremism. After commending several U.S. cities for their work to prevent the recruitment of people to violent extremism, Biden said this:

I want to make it clear, though, I’m not suggesting to the press or any of our guests that I think America has all the answers here. We just have a lot more experience. By that I mean we are a nation of immigrants, that's who we are. That is not hyperbole. We talk, we teach our kids we're a melting pot. The God's truth is, we are a polyglot, we are a melting pot. It is the ultimate source of our strength, it is the ultimate source of who we are, what we've become. And it started all the way back in the late 1700s, there's been a constant, unrelenting stream of immigration. Not in little trickles, but in large numbers.

The former vice president then went on to recount a conversation he had with the former Singaporean leader Lee Kuan Yew, who said that countries like China were looking for the figurative “black box” that “allows America to constantly be able to remake itself, unlike any other country in the world.” After commenting about this country's skepticism for orthodoxy, Biden returned to the theme of immigration, which is where the clip Carlson showed kicks in. But here's the context.

I said, “There's a second thing in that black box — an unrelenting stream of immigration, nonstop, nonstop.” Folks like me who are Caucasian, of European descent, for the first time in 2017 we'll be in an absolute minority in the United States of America, absolute minority. Fewer than 50% of the people in America from then and on will be white European stock. That's not a bad thing, that's a source of our strength.

A generation from now, as I said, things will be changed even more. It's not merely that we're a melting pot, but we're proud to be a melting pot. And with that, we've made a lot of mistakes, but we've also made a lot of progress. And you know, we've learned a lot of hard lessons.

But the most important lesson we've learned, we don't always practice it, is that inclusion counts. Let me say that again — inclusion counts. Inclusion counts. Being brought in and made a part of the community — whether as my Irish ancestors with signs, “No Irish need apply,” and the anti-Catholic movement of the Know-Nothings in the late 1800s, straight through to how some respond today to the number of folks in the United States of America that are Hispanic in background.

It’s always — we've always ultimately overcome it. But it's always been about inclusion, being a part of the whole. As I said, we still have problems, but I’m proud of the American record on cultural and economic integration of not only our Muslim communities but African communities, Asian communities, Hispanic communities. And the wave still continues. It's not going to stop, nor should we want it to stop. As a matter of fact, it’s one of the things I think we can be most proud of.

Perhaps now you understand why Carlson had to cherry-pick from Biden's remarks in order to remove them from a context that is a direct challenge to the great replacement theory.

Carlson has once again given Republicans their talking points and we're likely to be hearing this kind of thing whenever the topic of immigration comes up. Aaron Ruper is absolutely right: the great replacement theory (read: white supremacy) has become mainstream Republican thinking.