Can Someone Who Has Been Criminally Indicted - or Convicted - Run for President? 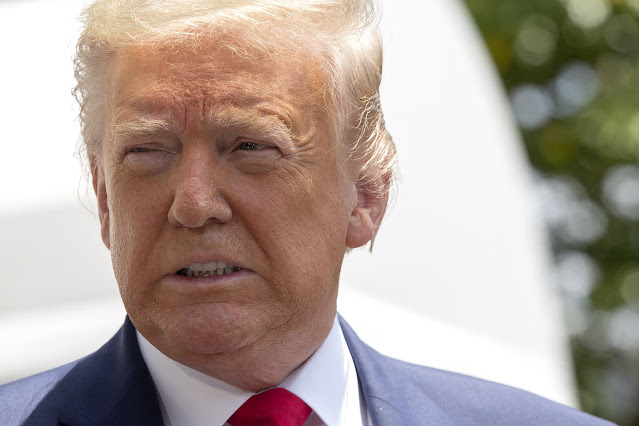 According to David Siders at Politico, it has become clear over the last week that Donald Trump will be running for president in 2024. He bases that at least in part on the former guy's thinly veiled attack on his most likely competitor for the nomination - Florida Governor Ron DeSantis. During a recent interview on the right wing OAN network, Trump called politicians who won't admit they got a Covid booster shot "gutless." That came after DeSantis refused to answer a direct question on whether he'd gotten a booster.

What Siders failed to mention is that DeSantis shot back - telling a right wing podcaster that one of his biggest regrets was not speaking out "louder" on Trump admin calls for lock downs during the pandemic. At least when it comes to Covid, DeSantis is positioning himself as even more extreme than the former guy. So the battle between these two guys is going to get very interesting.

There are those who think that one of the things that could potentially stand in Trump's way are all of the investigations he is facing into criminal activity. Those include the ones being conducted by the Manhattan district attorney and New York attorney general over financial fraud, Fulton County's investigation over the pressure Trump applied to overturn the election results, and DOJ's investigation into the events on January 6.

As we've seen, these investigations are painfully slow. But the 2024 election is still almost three years away. It is possible that at some point, Trump will at least be indicted, while conviction is much less certain within that window.

That raises the question of whether someone who has been criminally indicted can run for president. The answer is clearly "yes." The only qualifications stated in the Constitution are that the person must be a natural born citizen of the U.S., must be at least 35 years old, and must have been a resident of the U.S. for at least 14 years. To make matters worse, convicted felons are not barred from running for president, even those who are imprisoned. In other words, Trump could run again in 2024 - even if he is indicted or possibly convicted.

Signaling that is exactly what he would do, Trump issued this statement on the day it was announced that the Manhattan district attorney had convened a grand jury to review potential criminal charges.

This is a continuation of the greatest Witch Hunt in American history...Interesting that today a poll came out indicating I’m far in the lead for the Republican Presidential Primary and the General Election in 2024.

Our Country is broken, our elections are rigged, corrupt, and stolen, our prosecutors are politicized, and I will just have to keep on fighting like I have been for the last five years!

This is reminiscent of the one time Donald Trump actually told the truth. That was when he bragged that he could shoot someone on 5th Avenue in broad daylight and his supporters would remain loyal. Anyone who thinks that a criminal indictment, or even conviction, would sway right wing media or the MAGA crowd hasn't been paying attention. People who continue to believe the Big Lie will simply buy into the idea that the prosecution was corrupt and politicized.

But what I take from all of this is that three years is a long time. A lot can happen between now and then, which is why all of the horse race pontificating about the 2024 election is mostly a waste of time.