The latest revelation about Trump's attempted coup came from the release of the unsigned executive order dated December 16, 2020, that would have empowered the defense secretary to “seize, collect, retain and analyze” voting machines. The scheme outlined in the document provided a pretext for Trump to stay in office past the constitutional January 20 inauguration day while an “assessment” was taking place by the director of national intelligence, and it also would have appointed a special counsel to oversee the operation.

The question remains, however, "why didn't Trump sign the executive order?" It could be that his defense secretary refused to comply. It is worth noting that Mike Esper, who served in that capacity, had been worried that Trump would fire him the day after the election, but was hoping that he could hold on for a few days because "he was worried about what Trump might try to do with the military if he were not at the helm."

Esper was right in assuming that Trump would fire him after the election. The ax came on November 9. The new acting Defense Secretary would be Christopher Miller, who told associates he had three goals for the final weeks of the Trump administration: #1: No major war. #2: No military coup. #3: No troops fighting citizens on the streets. Why would the man in charge of the Defense Department even contemplate the possibility of a military coup? Perhaps the executive order was making its rounds by then.
Esper and Miller weren't the only ones who were worried.

As Trump ceaselessly pushed false claims about the 2020 presidential election, Gen. Mark A. Milley, chairman of the Joint Chiefs of Staff, grew more and more nervous, telling aides he feared that the president and his acolytes might attempt to use the military to stay in office, Carol Leonnig and Philip Rucker report in “I Alone Can Fix It: Donald J. Trump’s Catastrophic Final Year.”

Milley described “a stomach-churning” feeling as he listened to Trump’s untrue complaints of election fraud, drawing a comparison to the 1933 attack on Germany’s parliament building that Hitler used as a pretext to establish a Nazi dictatorship.

When writing about this previously, I pointed to an interview with Bob Bauer, a Biden campaign advisor, just prior to the election.

Frankly, I'll tell you that there are agencies that [Trump] imagines under his command whose members understand they have legal liability if they follow illegal orders - and they won't do it...I can promise you that if [Trump] were to attempt to disrupt or undermine the election, he will fail.

At the time I remember thinking that at least part of Bauer's job at the time had been to consult with military leaders about how they would respond if Trump issued an illegal order to launch a coup. Bauer's confidence stemmed from the fact that he knew what their response would be. Whether those leaders had already made up their minds, or Bauer and his associates needed to remind them of their constitutional obligations remains to be seen.

What we do know is that three days after the executive order was written, Trump summoned his own MAGA troops to the Capital for the January 6 insurrection. 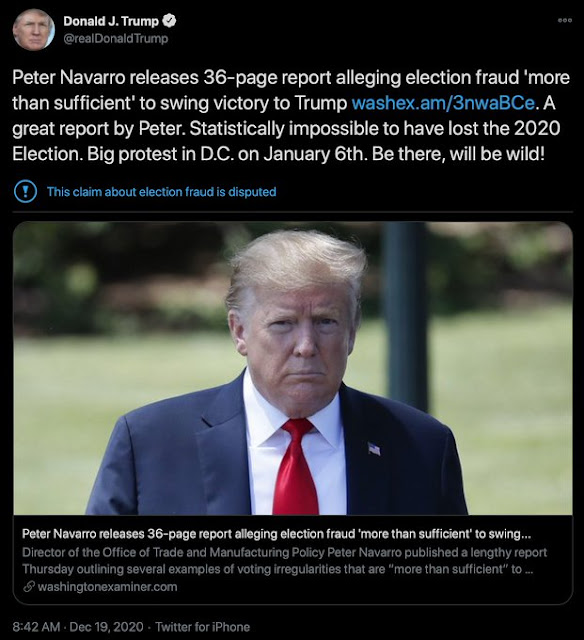 Since the beginning of Trump's presidency, I have been watching the interplay between the former guy's malevolence and incompetence. While a failed coup is just as criminal as a successful one, it certainly appears that this time, we escaped the death of our democracy because the bully's ignorance and incompetence overwhelmed his malevolence.
at January 25, 2022