The America I Believe In 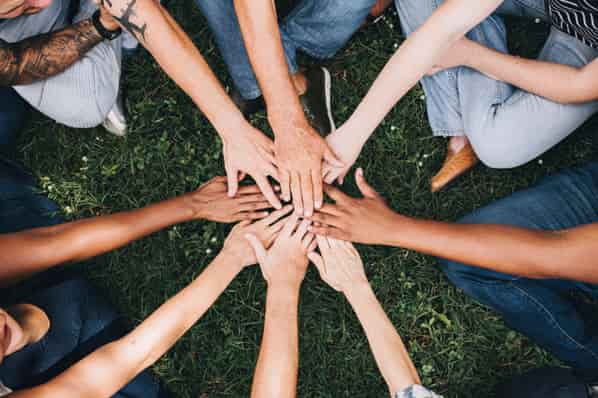 Over the last couple of days, Barack Obama raised the roof on the campaign trail in Georgia, Michigan, and Wisconsin. I'd love to reflect on all the ways he's re-energized Democrats at this crucial moment in time. But that would require a whole post in and of itself. Instead, I want to highlight one moment in Georgia where he addressed the most crucial issue of this election. It comes at the 0:21 mark of this video compiled by Stacey Abrams.

Georgia has defied history over and over again. We will do it once more on November 8. pic.twitter.com/K7tqypgO7c

There have always been certain values that bind us together as citizens, no matter who we are, where we come from, what we look like, or who we love. That's the promise of America. That's who we are. And in this election you have the chance to vote for leaders...who will fight for that big, inclusive, hopeful, forward-looking America that we believe in."

I was reminded of the fact that, even in a divided country, there's one thing most voters agree on. 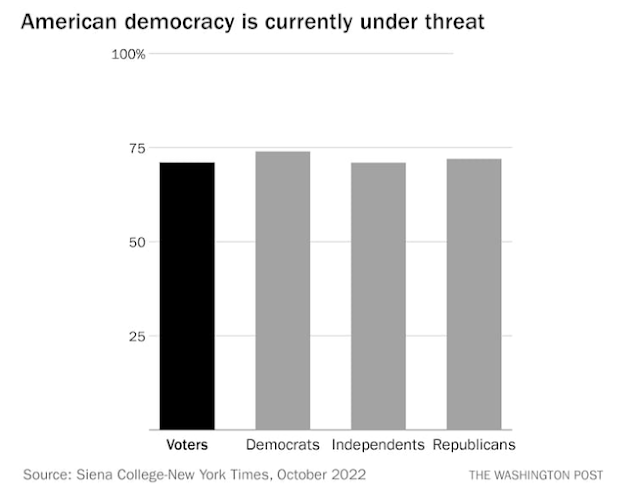 Seven in ten Americans think that our democracy is under threat. Where we're at odds is over what, exactly, poses a threat to our democracy. The difference is stark and rooted in the story we tell ourselves about this country.
I recently watched the movie, "The Good Shepherd," in which Matt Damon plays a fictional character  (Edward Wilson) who spearheaded the formation of the counter-intelligence division at CIA. Late in the film, he tried to force an Italian mobster into becoming a government asset by threatening to deport him. The target responded by saying, "We Italians got our families and the church. The Irish have their homeland. The Jews their tradition. Even the n****rs, they've got their music. What about you people Mr. Wilson? What do you have?" Wilson answered with, "The United States of America. The rest of you are just visiting." That is a story of America that consistently runs throughout our history.
The radical right continues to embrace that story - describing an ugly place where we’re all divided into tribes that see each other as the enemy. It’s a zero sum story where, in order for me to win, you have to lose - where advances in civil rights for people of color, women, and LGBTQ Americans pose a threat to those who assume that this country belongs to them.
That's why that clip from Obama's speech in Georgia is so important. It is a theme he returned to over and over again from his 2004 speech at the Democratic Convention to the one he gave during the 2008 election when he talked about "perfecting our union." But it was his speech at the 50th Anniversary in Selma that was devoted entirely to articulating this story of America.

It’s the idea held by generations of citizens who believed that America is a constant work in progress; who believed that loving this country requires more than singing its praises or avoiding uncomfortable truths. It requires the occasional disruption, the willingness to speak out for what is right, to shake up the status quo. That’s America...

Back in 2017, John Favreau wrote that "every election is a competition between two stories about America." Never has that been more true than this year. I think about that when I see candidates like Stacey Abrams campaign on the slogan: "One Georgia."

For 4 years, Georgians have survived despite Brian Kemp’s failures that caused 6 hospitals to close & gun violence to spread on our streets.

This election is our chance to take back our power and rewrite the narrative for #OneGeorgia where everyone can thrive, not just survive. pic.twitter.com/75it7eRljm

My own Governor, Tim Walz, is campaigning on a similar slogan.

Over the last few years, we’ve proven that we can work together across lines of difference to get things done – that’s what it means to be One Minnesota.

We might not agree on everything, but we can find common ground to improve lives. That’s what I’m working to do.

And I'll never get tired of watching this!

Our democracy is being threatened by those who assume that America belongs to them based on their gender, race, religion, and/or sexual orientation. But as Obama said, "in this election you have the chance to vote for leaders...who will fight for that big, inclusive, hopeful, forward-looking America that we believe in."
at October 30, 2022