Why Republicans Are Creating the Red Mirage 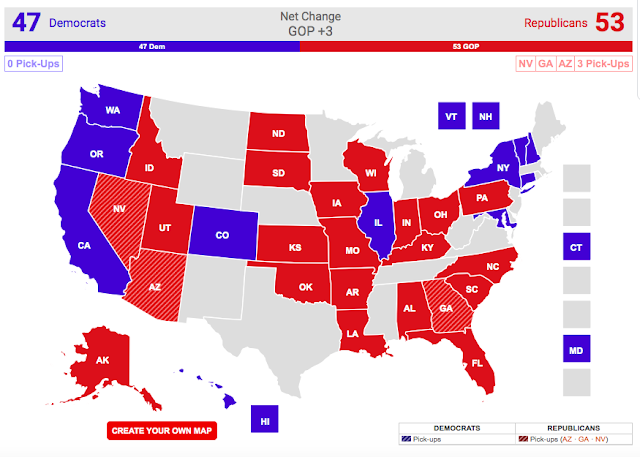 Like most of you, I'm incredibly nervous about the 2022 midterm elections. But it isn't just the outcome that has me worried. It's what comes next. The only two possibilities I see going forward are (1) Republicans win, or (2) Democrats win and all hell breaks loose. The former is being described as a "red wave," while the latter is based on the "red mirage."

A Red Mirage is on the horizon.

Republicans will attempt to call the election before every mail-in ballot is counted. They'll do everything in their power to stop the vote counting. pic.twitter.com/jbRy3OGfTf

The irony here is that, while the media has almost fully embraced the idea that we're heading for a red wave, there are countless ways that the radical right is hinting at the fact that they're going to lose. As just one example, Republicans in three battleground states are already suing to disqualify thousands of mail-in ballots. Why would they bother if they were so sure of winning in Pennsylvania, Michigan, and Wisconsin?

As is often the case, Tucker Carlson laid out the strategy last week.

Tucker Carlson is blatantly priming his viewers to question the results of any race that Republicans don't win. pic.twitter.com/eXy82J64nP

He first states that Democrats are expected to suffer overwhelming losses. That's pretty much what passes for conventional wisdom these days. But a closer look at reality shows that the signs are actually conflicted. On the one hand, Republicans seem to have picked up some momentum in the polls. But those who are tracking the early vote are seeing signs that are positive for Democrats. As a matter of fact, Jon Ralston - who knows Nevada politics better than anyone - has predicted that Democratic Senator Cortez Masto will be re-elected. That is mostly based on his analysis of the early vote.

The reason some folks are are more interested in the early vote than the polling aggregates is that for the last month or so, Republicans have been flooding the zone with polls that are likely biased.

So just looked at the October polls on @FiveThirtyEight in GA, NV, PA. Of the 37 polls I found there, 19, more than half, are Republican polls.

GOP appears to be flooding the zone and polluting the averages more aggressively than usual.

Why I'm focused on the early vote.

Skeptics wonder why Republicans would do that. The answer if clear: going into Tuesday, they want to create the illusion (mirage) that the GOP is winning. The right wing site RealClearPolitics is projecting that Republicans will win a 53/47 majority in the Senate, as is captured by the map in the photo above. If/when Democrats win, they'll claim it's because the election was rigged (Big Lie 2.0), which sets up the exact same scenario that Bannon described back in October 2020.

The good news is that it is still possible that Democrats could do well in this election. The bad news is that if that happens, all hell is going to break loose.
I don't mean to be an alarmist, but we should prepare ourselves for what's coming. We not only need to get out the vote, we need to be ready to stand firm against the onslaught that will be unleashed if we prevail.
at November 07, 2022