The Fight for Democracy is Far From Over 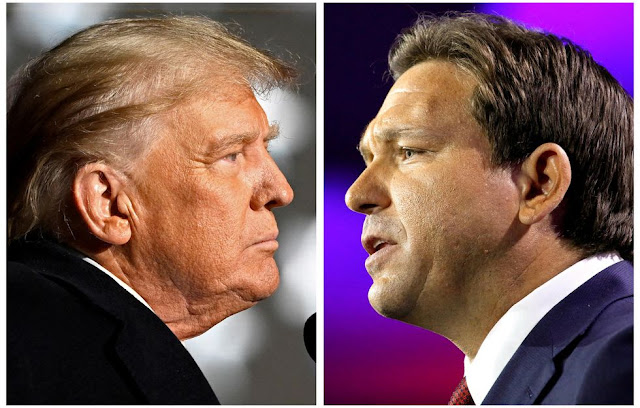 No conservative has chronicled the implosion of the Republican Party more accurately than David Frum. He's at it again with a post-mortem following the 2022 midterms titled: "The Lesson Republicans Refuse to Learn."

The question after the 2022 midterms is: Can conservatives learn?

Through the Trump years, the Republican Party has organized itself as an anti-learning entity. Unwelcome information has been ignored or denied...

The historian Bernard Lewis once offered sage advice to any group that faces adverse circumstances: “The question, ‘Who did this to us?’ has led only to neurotic fantasies and conspiracy theories. The other question—‘What did we do wrong?’—has led naturally to a second question, ‘How do we put it right?’ In that question … lie[s] the best hope for the future.”

I was reminded that in 2012, after suffering heavy losses, the GOP did an autopsy and came to the conclusion that they needed to do more to reach out to Hispanics, women, and young voters. They then proceeded to do the exact opposite.

Some things never change. As the 2022 results roll in, many of the loudest voices on the right are indulging in the "who [or what] did it to us" by attacking young people, women, and mail-in ballots. Questions like "what did we do wrong" and "how can we put it right" are impossible for them to answer because they only have three options on where to go from here.

This one has been a losing proposition for the last three elections. Adding to that is that their cult leader is pretty old and about to face indictments for multiple crimes.

2. Return to the failed policies of the Bush era.

This is what many of the NeverTrumpers are hoping for - including people like Liz Cheney. But there is a reason why the GOP stopped emphasizing their policies of the past: they failed miserably during the Bush/Cheney administration (Great Recession, two failed wars, Katrina, etc).

3. Embrace the fascism of National Conservatives.

This is the group that I have been following pretty closely over the last few months. When it comes to politicians, it includes people like Ron DeSantis, Josh Hawley,  and J.D. Vance. Their loudest voice is, of course, Tucker Carlson. But behind the scenes are people like Rod Dreher, Peter Thiel, Sohrab Ahmari, and Curtis Yarvin. For a truly frightening look at that last one, I'd recommend reading a piece by Andrew Prokop titled "Curtis Yarvin wants American democracy toppled. He has some prominent Republican fans."

[Yarvin] stands out among right-wing commentators for being probably the single person who’s spent the most time gaming out how, exactly, the US government could be toppled and replaced — “rebooted” or “reset,” as he likes to say — with a monarch, CEO, or dictator at the helm. Yarvin argues that a creative and visionary leader — a “startup guy,” like, he says, Napoleon or Lenin was — should seize absolute power, dismantle the old regime, and build something new in its place.

That provides some context for this tweet from the guy who cheered on the January 6 insurrectionists:

The old party is dead. Time to bury it. Build something new

The hero for most of these guys (they're almost exclusively men) is Hungarian President Viktor Orban. That is important to keep in mind as the media begins to pay homage to DeSantis as the Republican who can defeat Trump. Here's what Zach Beauchamp wrote about the Florida governor last April:

DeSantis, who has built a profile as a pugilistic culture warrior with eyes on the presidency, has steadily put together a policy agenda with strong echoes of Orbán’s governing ethos — one in which an allegedly existential cultural threat from the left justifies aggressive uses of state power against the right’s enemies.

Most recently, there was DeSantis’s crackdown on Disney’s special tax exemption; using regulatory powers to punish opposing political speech is one of Orbán’s signature moves. On issues ranging from higher education to social media to gerrymandering, DeSantis has followed a trail blazed by Orbán, turning policy into a tool for targeting outgroups while entrenching his party’s hold on power...

Orbán’s political model has frequently employed a demagogic two-step: Stand up a feared or marginalized group as an enemy then use the supposed need to combat this group’s influence to justify punitive policies that also happen to expand his regime’s power.

In other words, DeSantis envisions himself as the monarch/CEO/dictator Yarvin longs for. If you think I'm exaggerating, then you probably haven't seen the closing ad for the DeSantis campaign.

On behalf of millions of people, never stop fighting for freedom. pic.twitter.com/5wcopo041U

Of course, there's some overlap between these three options. For example, Jeb Bush recently said that DeSantis has done a “great job” as governor, praising his COVID-19 response and education policies. Bush also said that the Florida governor has broad appeal outside of Florida because he has attacked cultural issues that are present in the Republican mindset.

Since I don't really have a dog in the fight between these three options, I'd suggest that the most important thing to keep in mind is that they all embrace two things: racism and sexism. Taking away a woman's right to chose has been part of the GOP platform for decades. The same thing is true for voter suppression. One of the basic tenants of the National Conservatives is that Republicans have been too soft on fighting the so-called "culture wars," so it is time to use government power to go after their "enemies."

This is the fight that is going to consume Republicans over the next two years. As I see it right now, the momentum is currently with the National Conservatives - especially following solid victories by DeSantis in Florida and Vance in Ohio. That's why the fight for democracy is far from over.