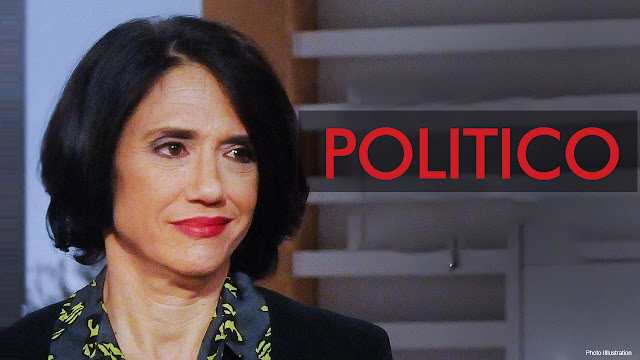 One of the reasons I've always been interested in the NeverTrumpers is that I too was once immersed in conservative politics. Questions began to emerge - one often leading to another. Rather than deny those questions, I thought them through. The process was gradual, but eventually I found myself on the other side of the political spectrum.

It might be a bit of projection, but I see the same process happening with the NeverTrumpers. Due to the insanity of Donald Trump, it came a lot quicker for most of them. But someone like David Frum started the break years ago, as was evidenced by his column titled "Waterloo" in which he explained how the Republican Party had been captured by right wing media.

One of the columnists who went through a more abbreviated process was Jennifer Rubin from the Washington Post. She was an avowed Republican who couldn't stomach Donald Trump. I watched as she began to ask questions, coming to the conclusion in late 2017 that the GOP couldn't simply be rebranded, it needed to be junked. Here is how she described her former party:

If there is a single idea animating Trump’s GOP, it is that “blood and soil” (or race and religion, if you prefer) — not the American creed (“All men are created equal…”) — is the defining feature of the United States. Whatever else that is not white and Christian is foreign, alien and a threat to “real America.” Whether in day-to-day politics, foreign affairs or domestic policies, there is no right and wrong, only them and us. That’s Trumpism in a nutshell.

Regardless of how you feel about Rubin's conversion, she was spot-on.

I say all of that because on Thursday, Alex Thompson and Nick Needzwiadek at Politico's "West Wing Playbook" decided to launch an attack on Rubin. They suggest that she has become one of the White House's most reliable defenders and have a big problem with that. The evidence they provide: White House staff sometimes tweet her articles. They go on to say that this is because "she usually backs up the administration."

OMG - an opinion columnist who often agrees with a president! What an affront to journalism! Of course, Thompson and Needzwiadek don't provide any specifics about where Rubin and the president were wrong because being accurate or inaccurate is not the issue. For them, real journalism means that you are required to find fault with both sides.

The authors then engage in a typical Politico pattern of reporting on a whisper campaign from anonymous sources suggesting that Rubin has stoked divisions within the Post newsroom. Here's a quote from one of their sources at the Post:

“She is an opinion columnist and does not represent the newsroom,” said one Post reporter. “I think our news coverage has been pretty sharp toward Biden on a number of fronts — immigration, Afghanistan, etc. — and we have a lot of good reporters. Jen Rubin is not a good representation of the news coverage of the Washington Post. I have been asked before if I hate sharing a newsroom with her... I reply that I don't.”

Now that's the kind of journalism Thompson and Needzwiadek applaud. Being "sharp toward Biden" is what "good reporters" do, regardless of accuracy.

From there, things get even worse. The authors point out that they reached out to Rubin to get a response. Initially she ignored them. But recently she sent them an email with the subject line: "OFF THE RECORD." They quoted the whole thing anyway, justifying it by saying that they hadn't agreed to conduct an off the record conversation. So the folks who are attacking Rubin for her style of opinion journalism decided to reprint private communication that she clearly identified as off the record. What blazing hypocrites they are!

Since they've already published Rubin's email, it is worth noting that she is also spot-on in her assessment of Politico (emphasis mine).

How utterly predictable that Politico would run the zillionth hit piece on a prominent woman, especially one candid in her critiques of Politico's hysterical, clickbait style of coverage. The notion that I am polarizing in a newsroom (as opposed to any of the dozens of other opinion writers) is a "take" only Politico could come up with — by of course running around to ask the question in the first place. I trust the Post's superb news side folks spend zero time thinking about me (as is entirely appropriate).

Of course, the Politico piece was picked up by right wing sites like Fox News and Red State. It also garnered applause from Tucker Carlson's favorite guest, Glenn Greenwald. So if, as I suggested recently, the new owners of Politico want to pattern it after their European tabloid by mainstreaming the far right, the publication is already well on its way to fulfilling that goal.

It is worth wondering why Politico chose to go after Rubin when they could have chosen other targets at the Post like NeverTrumper Max Boot, or perhaps a liberal opinion columnist like Jonathan Capehart who also tends to agree with the Biden administration. This is the kind of dilemma women often face. They have to wonder if attacks like this are motivated by sexism. Rubin suggests this isn't the first time Politico went there when she wrote that this would be their "zillionth hit piece on a prominent woman."

I've been clear for a while now that Politico is a big part of the problem with mainstream media. Commenting on the fact that the publication has recently been bought the German media company Alex Springer, Perry Bacon suggests that Politico bears some responsibility for the fact that political journalism drifted off course.

Politico largely embraced the prevailing orthodoxies of political journalism, particularly in its early days — it was Beltway-focused, obsessed with not offending Republican readers, sometimes resembled sports coverage and its leading reporters were nearly all White. It was in many ways just a faster, more interesting version of how politics had long been covered...For more than a decade, not only did Politico keep gaining strength, but the entire political media became more like Politico.
And this is where things went wrong. It was (and is) fine to have a publication focused on insider politics. But it was not ideal when The Post, the New York Times and many other major mainstream news outlets drifted toward this model — and when they did so was particularly problematic.

The Politico approach is probably fine if you are covering parties and politicians who share some values and norms...But early in the Obama years...the most important stories in American politics were the deepening polarization of the American electorate along cultural and racial lines and the growing radicalization of the GOP. But a Politico-ized national political press was both largely unwilling and in some ways unable to center its coverage on those realities.

Bacon ends his piece on an upbeat note, suggesting that the presidency of Donald Trump shook up those norms. But as this attack piece on Rubin demonstrates, that is not the case at Politico. For that publication, woe be to any columnist who shuns bothsiderism in favor of making rational arguments.