Biden: "This Is No Longer Your Father's Republican Party" 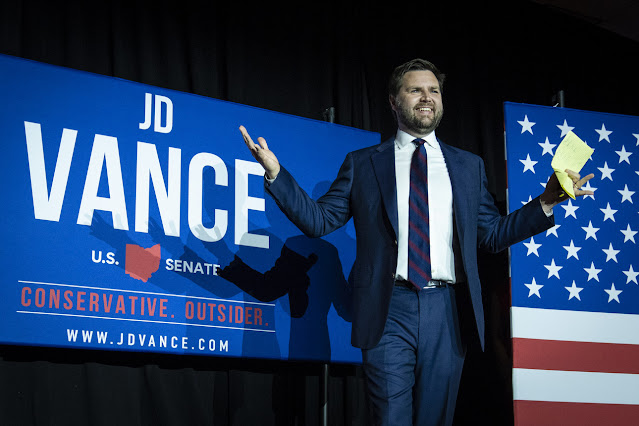 For quite a while now, one of my takes on what's been happening with the Republican Party over the last few years is that things reached an inflection point for the GOP when Barack Obama was elected president. That is because, by the end of George W. Bush's two terms, their entire agenda - both foreign and domestic - was in shambles as a result of things like the Great Recession, two wars in the Middle East, and the debacle of the response to Hurricane Katrina.

As a result, when Bush left office, his approval rating was historically low at 27.8. Of the previous 12 presidents, the only one who even came close was Richard Nixon, whose approval rating was 24.8 when he resigned over the whole Watergate scandal. In other words, by 2008, the Republican brand was toast.

At that point, it would have made sense for Republicans to step back and re-examine their policy priorities, just as Democrats had done after the 1972 election. But it probably wouldn't have surprised anyone if the GOP had simply doubled-down on their policy priorities with new messaging (ie, continue to be the post-truth party). They did neither. Michael Grunwald explained what they DID do:

The calculation GOP leaders made was that they didn't need an agenda. They would simply obstruct and fan the flames of xenophobia to discredit the country's first African American president. That's what led to Trump and the whole MAGA era.

It's been clear for a while now that Mitch McConnell still wants to avoid adopting an actual Republican agenda. But there are two sides that are rising up in protest to put one forward.

One the one hand, there is Senator Rick Scott's agenda that - for the most part - reasserts the failed Republican policies of trickle-down economics, destruction of the social safety net, and dog-whistle racism. Scott probably thinks that enough time has passed that voters will have forgotten what a disaster that agenda turned out to be.

But the other Republican agenda is even worse. It is being put forward by people like Senator Josh Hawley, J.D. Vance, Tucker Carlson, and Governor Ron DeSantis. While they won't say so openly, their approach is to completely abandon the Ronald Reagan mantra about government being the problem. As I've pointed out before, they want to use government to fight the culture wars.

Over at The Federalist, Christopher Bedford has written that J.D. Vance's victory in the Ohio Republican senate primary is a sign that what he calls "the new right" is winning against "the establishment" in the battle for control of the Republican agenda.

[T]here are signs that together, we’re beginning to earn wins: that the rock of the permanent, institutional left-wing-revolution is showing cracks. In the past month alone, we’ve seen a bellwether American state choose an outspent New Right candidate [Vance] to run for Senate, adding a young face and new voice to conservative leadership.

We’ve seen elected politicians in Florida stand up and say, no, you won’t get corporate carve-outs and perks, and use those to attack the parents and children of our state without consequence...

And we’ve seen Senate leaders sit silently, or chuckle along with reporters, as they anticipate the New Right’s failings. We’ve seen columnists like Stephens complain that curtailing one of the world’s most barbarous abortion regimes “would be a radical, not conservative, choice.”

That’s not surprising, though. These men aren’t actually conservatives: they’re simple institutionalists. And in an age where America’s institutions — her colleges and universities, corporate media, Wall Street, Silicon Valley, hospitals and medical associations, Pentagon, Hollywood, children’s entertainment — are dominated by the left, their acquiescing makes them what M. Stanton Evans derisively called “silent partners in the work of destruction”; “silent partners” in the left’s permanent revolution.

I suspect that Bedford is right - the "new right" is winning this battle. And while, as a Democrat I don't have a dog in this fight, it is important to keep in mind that our democracy is threatened by the side that is openly embracing the tactics used by Viktor Orban in Hungary.

When President Biden said that this is no longer your father's Republican Party, he was absolutely right. So was David Frum when he wrote that "If conservatives become convinced that they cannot win democratically, they will not abandon conservatism. They will reject democracy." That is the path the GOP is choosing today...as we speak.